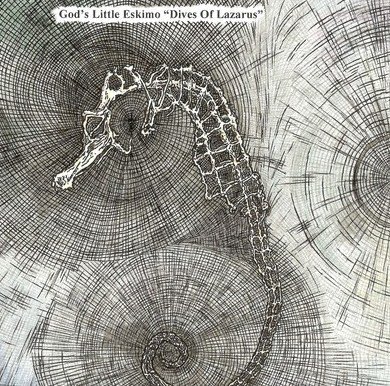 Long term readers of this site will be aware that although my main obsession is psychedelia, I also have another side that appreciates the subtleties and nuances of folk music in it's various forms.
And it's this side that is very much taken by the third and apparently final album by an unassuming gentleman who likes to be known as God's Little Eskimo.
John Eskimo (we're getting closer to his real name) is a rather talented freelance illustrator who records (or should I say recorded, as he now speaks of his musical alter ego in the past tense) music on the side, seemingly for his own satisfaction rather than any monetary gain.
While this description may conjure pictures of a self absorbed hack with the voice of a strangled cat, the reality couldn't be further removed. The truth of the matter is that if God's Little Eskimo had been heard by the right people and signed to a label like 4AD, critics and discerning punters alike would be lapping this up.
If he's chosen to end his musical dalliance because he's said what he needs to say, then this is a very fine swansong indeed. And if it's a lack of recognition that's caused him to call it a day, then there's certainly a case to be made here for there being no correlation at all between the quality of a record and the amount of people who've heard it, because "Dives of Lazarus" is a wondrous thing.
A song cycle that tells six nautical stories with an amusing origin (which you can read about on Eskimo's own blog here), it's the sort of album that initially sounds difficult but intriguing and then flowers into something you never expected within a couple of listens.
It's a fairly sparse album dominated by Eskimo's intricate piano work which often evokes the gentle rolling of waves, as well as his own voice which is used in a number of imaginative ways, often multi tracked (check out opener "Scapa Flow").
While the songs are often long, the narratives are gripping and the instrumental passages are so lyrical that vocals would seem like an intrusion. Textures are provided by a number of unusual instruments - wine glasses, musical saw and some lovely autoharp work (which sounds like it's being played backwards psych-lovers!).
It's hard to pick highlights, but "Sea Mist" is the most immediately striking track with it's uncharacteristic prog rock chug, while the chorus of the title track is likely to effect all but the most stone hearted.
It's a unique and marvelous album.
E-mail John at godslittleeskimo@yahoo.com to order on CD. They're not likely to be repressed at any point, and it would be a total travesty for music as fine as this to remain undiscovered.