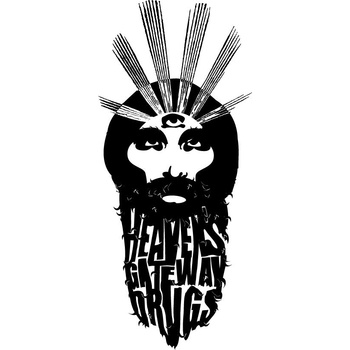 This is an addictive little release from Heaven's Gateway Drugs - so much so that I seem to have developed the habit of scrolling into the H's on my iPod when I'm not paying attention to what I'm doing.
On first listen they sounded good, but not a whole lot different to the current crop of U.S psych bands following in the Black Angels footsteps, but with one important difference that has led to their subconscious appropriation of my free will.
While a lot of their peers have generally got the sound and attitude they're aiming for down pat, there's very few out there that can also boast the hooks found on this debut E.P.
Opening number "Come Summer" may be not particularly representative of their sound, but illustrates this point well with a killer pentatonic riff and inventive arrangement that suggest "Ticket to Ride" if it'd been recorded for "Revolver", right down to the sighing backing vocals and backwards guitars.
Elsewhere things sound more homegrown. Stacks of reverb swamp the twangy spy guitars and creepy organs of  "Psychic Sidearm", while a sinuous guitar riff and tambourine heavy percussion drive "Highway Hipnosis".
"No Lonely Fate" is an impressive showcase for vocalist Derek Mauger who sounds liker David Byrne possessing Robert Smith at times during it's climactic chorus. Some tastefully placed twelve string jangle doesn't do any harm either. Magic.
And this isn't even taking into account the sinister sitar drenched "Missed Connection (Shadow)" which ups the psychedelic factor considerably before turning into a stoner rock riff fest, before finally evolving into a quite beautiful piece of pastoral eastern psych.
Reeeeeeallllly looking forward to hearing what these guys do next.

Stream or download here (hint - if you want to buy (which you should) you need to buy the tracks separately) :