King's Daughters & Sons "If Then Not When" Review 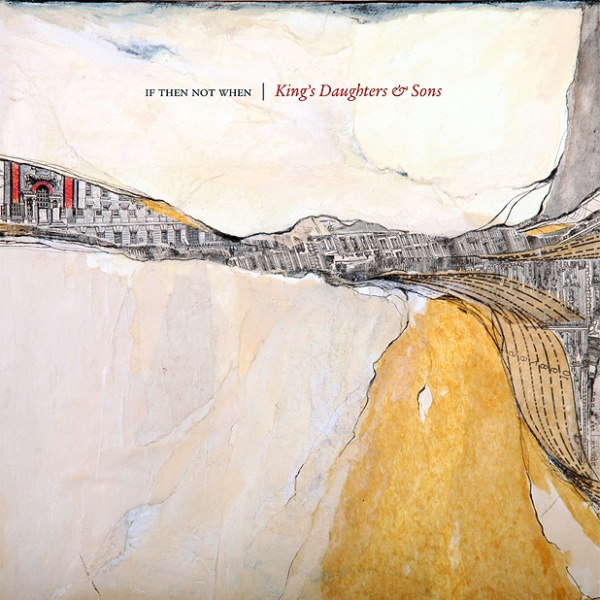 "we are watchful now,
we few and we take care,
and gather in the gloaming.
we are hopeful, not too hopeful
and we will sing,
just to spite you "

Lines from the gorgeously elegiac album opener, Sleeping Colony. It conjures images of furtive cloaked figures, gathering in disused abandoned lots, warehouses with dirty stained windows. Eyes bright, and flashing with misunderstood ancient light, that must be carefully concealed during the day.
During the ‘00s, there was a general feeling of decay; dancing in the nuclear embers of the 20th century. Like a line from the first track on the first Godspeed You! Black Emperor record, The Dead Flag Blues; “We are trapped in the belly of some horrible machine/and there’s no driver at the wheel/Kiss me, you’re beautiful, I said/for these are truly the end times.” It seemed like we were living in St. John’s apocalypse, we just didn’t know where it was coming from. ‘Destroy All Dreamers, With Debt And Depression’, they said. Its all been done before. Writers and philosophers ruminated endlessly on the endless facsimile and regurgitation of culture, like a uroboros swallowing it's own tail, we were all destined to eat shit. The psychedelic futurism of the late 90s (which was one of the heydays of rave culture, lest we forget) fell like a biblical prophecy with the twin towers. Hope went underground; gone but not forgotten. The faithful, the hopeful, burrowed down and waited for Spring.
Almost every journalist has been nihilistic about the music scene, about the effect that the internet is having on our attention spans, our ability to focus on and appreciate art. They claim that music is vanishing like an ephemeral steamcloud, nothing to hold on to, and foretelling a return to minstrelry or vaudeville. A nation of entertainers, begging for dollars on the streetcorners. And in a certain respect, and that’s all we’ve ever been doing. Humble buskers, we hold on to the hope that our art is valid and valuable. We believe our bands, and the bands that we love, are the greatest on the planet, and if people don’t like it than they’re stupid. If yr not striving to be the best, why not? The internet has levelled the playing field, acting as a crucible to wade out the dreck, ie. the insincere, and only the shining golden purity will remain.
It’s with this in mind that i’ve chosen to write about "If Then Not When" by Kings Daughters & Sons. They’re a quintet of Louisville, Kentucky’s finest, alumni from its esteemed post-rock scene. The most well-known of the bunch is Rachel Grimes, of the incredible Rachel’s chamber outfit, who lends her piano abilities and glorious glowing voice. There’s two members of under-appreciated group The Shipping News, Kyle Crabtree and Todd Cook, on bass and drums, respectively, and a couple of newcomers, Joe Manning and Michael Heineman, both adding vocals and guitar. Together, they make a powerful surging rock noise, primal pounding beats give a ritualistic air, while the two guitars play off each other like light on the water, delicate and sensitive, languid and rolling. They make whispery folk murder ballads, full of betrayal and retribution. Its a bit like if Colin Meloy were to front the Retribution Gospel Choir. Its classical, its traditional, its drug addled; the ancient and the modern, making something truly timeless. The general tone of the album is the most lush, haunting, codeine-induced reverie you could ever hope for, rich vocal harmonies and guitars like a velvet sea. Kings Daughters & Sons, have a raging heart.
Some of the members of KD&S have made some of the most beautiful and challenging and interesting music of the last 20+ years, and a lot of it remains underground and unknown. They keep on keeping on, they sound like wizened wizards at this point. There is no replacement for experience, and the Louisville/Chicago post-rock axis has consistently made excellent music, but you don’t hear a lot about it. It was popular in the late ‘90s and early ‘00s, then people moved on to other things, while ‘Post-Rock’ became an increasingly dirty word, mired down in flabby imitations. The originators kept at it, however, under the radar, and it is for that reason i am writing about this record. Over at my main blog, Forestpunk, I write a series called the 66.6 series, which is a play on the 33 ⅓ books, which fanatically enthuses over an individual record. With the 66.6 series, I am trying to look at whole scenes, genres, discographies. Its an attempt to wade through the archives, what I call the akashic records, and find the grim grinning ghost of a particular album or artist.
The naysayers are skeptical that our attention span can hold up. We’re all doomed to become spineless jellyfish floating in an endless sea of possibilities, unable to pick our choose for ourselves. The way through this is through attention and appreciation; stopping the endless rush of progress and just chilling out and listening to stuff. We have every available resource, at our disposal, the curious mind could reach new expanses of brilliance, but we must resurrect classic virtues like patience, quality, empathy, to weather the transitional period.
King’s Daughters & Son have made a remarkable record with If Then Not When. Its subtle and often times heart-wrenching. Its full of longing and survivor’s guilt. The way it mashes up modern experimental music with traditional folk structures is particularly disorienting and psychedelic, its like a portal that drags you through time, to show you frozen moments, like stuck lightning. Its become a consistent companion in my daily life, as have several of the musicians, offering condolences on black days. We all keep on keeping on, we are still right here, giving blood, keeping the faith. Sweating and bleeding and crying for our cause, but with our faces turned up to the rain. We are unbowed and unbroken by the relentless phantom of Greed and Insecurity. Many of us have died, already, and we will hold a vigil, when the ground thaws. For now, we are surviving, and giving your love to the masterful is one way through the fog.

The recording was made direct to 2 inch tape in 2008 and 2009 at The Funeral Home by Kevin Ratterman, engineer for California Guitar Trio, My Morning Jacket and Wax Fang. Mastering by Bob Weston, Chicago Mastering Service.