The Blondi's Salvation "Songs of the New World Order" Review 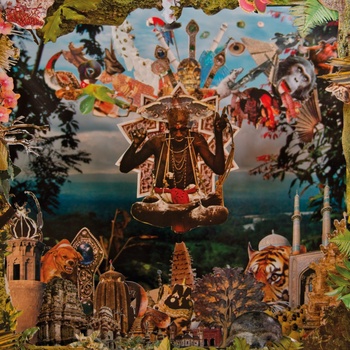 There's been some pretty amazing psychedelia coming out of France over the last few years, and this debut from The Blondi's Salvation may well be the best of it that I've heard so far.
Their sound is familar - the chugging drone of the Velvet Underground married to the apocalyptic sound of The Doors at their most frenzied applied with massive layers of reverb.
What makes them a little different from their peers (apart from the strength of their material, which is impressive for a debut), is their level of commitment in presenting psychedelia as quasi-religion. Sample song titles; "Path of the New God", "Open Your Third Eye", "The Mother Cloud". They've also started The French Reverb Church - an association for European psychedelic artists to get together as a community. It's hard to not use the word "fellowship" when attempting to describe it.
Whatever they're up to it makes for some pretty great psychedelia.
Opener "Dereliction Song" has hooks from the get go with great sitar work, a big eastern scale riff and an epic build up towards the end with huge tribal drums.
"The Mother Cloud" is a more conventional piece of reverb psych with a great guitar riff that's never in any doubt that it runs the show.
"Open Your Third Eye" has some of the nicest sounding vintage organ work you'll hear in an album recorded after 1968.
There's a certain amount of schtick at work for sure, but the feverishly repeated chant of "Come with is and you'll never die" from "By Our Side" is delivered with such devotional fervor that all but the most stubborn are likely to get on board and worship alongside The Blondi's Salvation.
Top stuff.

It's available as a name your price download through Bandcamp here :