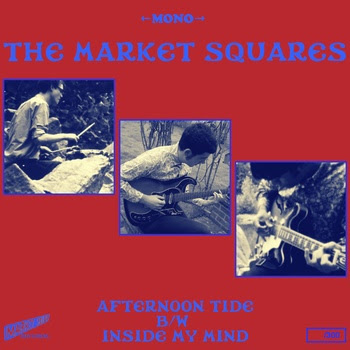 The days of the super group are not as far behind us as you may think.
A trip to Nashville last Summer by Paul Messis (solo/ The Higher State), led to a spontaneous weekend of recording activity with Calvin and Evan of The Sufis - the fruits of which are this superb 7", the first released on Paul's own Market Square label.
As you'd expect from artists of such a pedigree, they're gems, with the A-Side "Afternoon Tide" - a ramshackle folk rock number with tumbling drums and some lovely Syd Barret style (i.e eccentric) guitar leads.
"Inside My Mind" on the other hand mixes the best of U.S sixties garage with a Lennonesque verse melody and a big group harmony in the chorus.
Naturally you need this, it's fabulous and is destined to be a collectable.
It's a limited edition pressing and will sell out quick! You can buy directly from Paul through his bandcamp page here, or from the following stores / labels :  Burger Records, Kool Kat Musik, 13 O Clock Records, Get Hip (all U.S ),Soundflat in Germany, Clearspot in Holland and State Records. Get it quick - Paul's told me he's only got 63 copies left after sending out to these stores, so they're gonna go super fast.

You can stream it here :

Paul told us a little bit about how this collaboration came about :

How did you end up working with The Sufis for this Market Squares single??

Working with Calvin and Evan from The Sufis as The Market Squares happened by pure and remarkable chance. I had e-mailed Calvin a few months prior, purely because he was a kindred soul - he collected records and even enjoyed the weird stuff like La Monte Young like me. Plus The Sufis recorded in a similar fashion to myself. I was blown away by The Sufis' songs which at the time were 'music to my ears', cos it felt like someone else had the same goals in sight as myself, not too mention, in hanging out with the guys and getting to know them personally, they also share the same Punk ethic that I uphold and that more than anything else is great - more bands/musicians need to be totally true to themselves in this sorta way.
I basically had a trip planned to Tennessee and Georgia during the Summer of 2012 where I was visiting some old friends and I emailed Calvin about hanging out, maybe just to be taken to some record stores in the Nashville area, go to some bars, eat some good food etc. Calvin emailed back and said "hey why don't we try and record something?". Initially, I didn't think anything of it, in fact I had no real expectations to record anything. I'm a pretty difficult guy to work with musically - hence why I do all my own stuff myself, so if anything, I thought when I arrived at their house that I'd be just hanging out, listening to cool records and then heading into Nashville for fun. However, within an hour or so, we began to work on songs.
Before heading to Tennessee, I had emailed one of my demos 'Inside My Mind' simply in order for Calvin to hear it - had we not recorded it, I am sure I would have recorded it as a solo track. Regardless, over a couple of hours, we worked on a song I literally made up there and then. This became 'Afternoon Tide'. I pretty much wrote the thing on Calvin's couch. Evan returned to the house a couple of hours later and in the time span of about two hours we completely recorded and finished 'Afternoon Tide'.
Afterwards we ordered a pizza and were all kinda excited about how the recordings were going, especially considering we had never met before and it usually takes a lifetime for musicians to gel with one another - plus the track was sounding pretty cool and interesting.
During my time in Tennessee, I was developing a flu-like symptom and a chest infection, so had asked if The Sufis had any medication. Calvin gave me some medication for this, and well... I had a horrible allergic reaction to the medication and spent the night thinking and feeling like I was gonna die on their couch - it was intense!!! The next day, I felt totally ill. There was no way to describe it, I was not in a good shape. Evan went to work, Calvin visited some friends and ran some errands, whilst I lay comatose on their couch. The guys returned and we begun to work on 'Inside My Mind', my demo of this track is more Byrdsy and the day before, myself and Calvin were gonna try and make it a full-on-orchestration akin to something on Love's Da Capo LP. I guess due to being ill and not functioning correctly, the song became more punk in it's delivery.... During the recording of this, I was really feeling like death, I was exhausted and getting hot and cold sweats, so the delivery of my guitar playing was someone frustrated. I loved Calvin's bass and Evan's drumming. I couldn't speak so I was worried how I was gonna sing this track - that's why the vocal on 'Inside my Mind' is a little wayward. Evan gave me some magical elixir that I was able to chew on and like magic, I could briefly speak for an hour and so, we pushed record and even double tracked my vocal for that track, it took about an hour and a half to record 'Inside My Mind' and so, a two track session was complete It was one of the quickest recording sessions I've ever been involved in and in some way, I dig it. I certainly think the spontaneous nature of the recordings gives the tracks a really PUNK and DIY feel. When we were recording 'Inside My Mind' we all felt it had a Pere Ubu type of vibe more so than anything psychedelic or sixties influenced.

Where did the name The Market Squares come from???

Before heading to Nashville, I had decided on starting my own DIY record label, mainly to release my own stuff and some other bands I liked and was toying with the a bunch of names. The one which struck a chord with me was Market Square Records. This is due to living in a village between two market towns which both have a street called 'Market Square'... I kinda dig the vibe of the name, so chose it for the label. I wanted to create something totally new with my workings with The Sufis, and so called them 'The Market Squares', the choice for this is inspired by many 60s garage, doo-wop and soul 'private press' labels, labels which were simply vanity-labels (essentially the DIY-punk label of the 60s). An example would be a band called The Foamy Brine, who released records on their own 'Brine' label. In 60s underground music, this kinda label/band thing is found in abundance. I also liked the double-meaning of The Market Squares - on one hand it is regal and brings images of olde England towns selling goods and stock and on the other hand as it was intended in the US pop-culture lingo, The Market Squares being Village Idiots or the Squares of the town etc - not too mention there is cool pop-art imagery in the name too.... I dig it, so I chose it to be the name for the label and band.

Will there be more Market Squares releases??

Honestly, probably not. This release was a spur of the moment thing, it just happened!!! I'd love to work with Calvin and Evan again, as I am sure they'd like to work with me again, we had fun making music together.... but I think the distance plays a huge part in things such as this.

What other plans do you have for your label?

I've got so many plans for the label, it's just about weighing up the finances and then trying to make a little bit of money at the same time, to keep fire in the furnace. My next release on the label will be another side-project with myself and The State guys, hopefully to be released in Autumn.