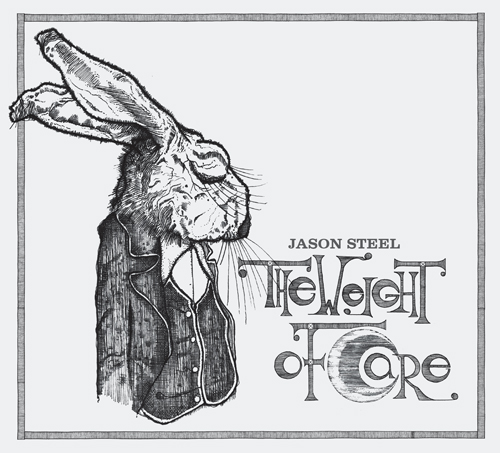 I'm a little late picking up on "The Weight of Care", but suspect I'm probably not the only one.
My interest was first piqued when I recognized that Jason Steel had been a member of one of my favorite modern folk outfits, the now sadly defunct Owl Service.
While The Owl Service generally concerned themselves with following in the tradition of folk rock pioneers Fairport Convention, Steeleye Span and the like, Steel is a much more diverse character who manages to combine the traditions of old with a contemporary singer-songwriter's knack for intimate and often desolately melancholy songs - an English alternative to Hank Williams high lonesome sound if you will, which is accentuated by Steel's fragile and emotive vocal delivery.
His press-kit begs comparison to Leonard Cohen, and while there's certainly a kinship with Cohen's early bedsit material, the Fleet Foxes Robin Pecknold is probably a more accurate comparison aesthetically. Like Pecknold, Steel's songs have an ancient air to them. he may present his material in a much less grandiose fashion, bur he has the same ability to capture the listener's attention and devastate them with the simplest of phrases.
Steel's intricate guitar playing provides the majority of the accompaniment with a little double bass and violin added here and there for colour, but never overpowering Steel's attention grabbing vocals, which often rely on unusual cadences, and accentuating unexpected words.
"Glass Case" is a deceptively simple sounding highlight with intricate guitar and vocal interplay and suitably morose violin touches swelling in the mix just when they're needed.
"The Feast" proves he's just as adept on the banjo, but it's on sole instrumental "Jessica's Fingertip" that his instrumental prowess is best displayed - a beautifully melodic and tasteful fingerstyle guitar showcase that reaches for the likes of "Angi" and almost gets there.