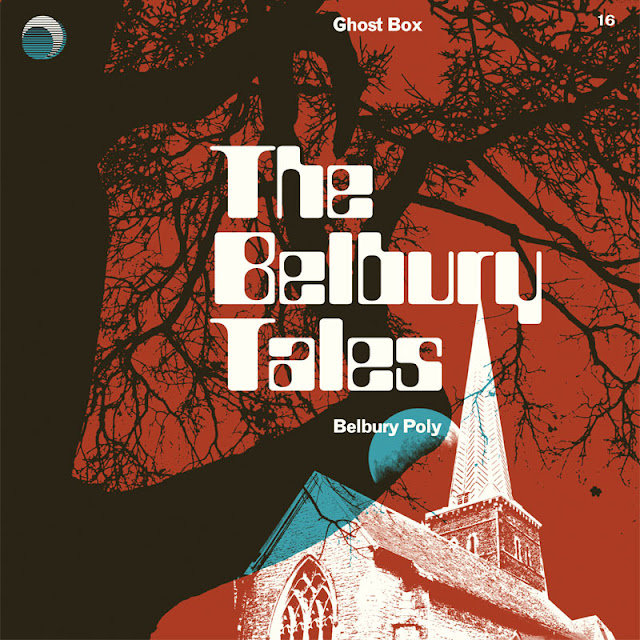 Arriving in this morning's post was a much anticipated treat - Belbury Poly's Belbury Tales. A new Belbury Poly album is always a cause for celebration, and this may well be Reverend Jim's best work yet.
Julian House's evocative cover artwork promises much, and is truly something to savor, as are it's delectable contents.
For those unfamiliar with Belbury Poly, think warm analogue electronica, equal parts Boards of Canada and the BBC Radiophonic Workshop.
This sees the first instance of Belbury Poly bringing in outside musicians to augment his sound, Jim Musgrave and Christopher Budd fitting in seamlessly on drums, guitars and bass.
To say that the Belbury Tales is delightful ( which it undoubtedly is ), would be doing it a disservice as it operates successfully on more levels than this would suggest.
Take Cantalus as a case in point,an irrepressibly chirpy analogue theme with pitter-patter, brushed drumwork and electric spy guitar that unexpectedly and seamlessly drops in a spooky men's chorus making melodic Scooby Doo ghost noises every now and then. The effect is something akin to catching the janitor in the midst of some diabolical ritual in the broom cupboard of your local toystore.
Green Grass Grows appears to be an affectionate Broadcast homage, with an uncredited female vocalist channeling the adventurous spirit of the much missed Trish Keenan, despite not really sounding like her.
The Geography is full of aching melancholy and sounds like the most ancient thing in the world - definitely the most successful marriage of Hauntology and English Folk that I've heard so far.
Things get a little beatier towards the middle of the album, with A Pilgrim's Path sounding like another classic lost seventies TV theme, Now Then coasting along on squelchy radiophonic keyboards and Chapel Perilous making the best use of live drums on the album, with some tricky backwards guitars and an ever-present wall of shimmering synths.
My Hands sounds like a collaboration between Moon Wiring Club and John Barry, while Goat Foot is much more playful, with an almost Eastern melody played on what I can only imagine is a zither. Brilliant.
Unforgotten Town starts out as moody and mysterious as it's title suggests before introducing a stately synthesized harpsichord theme, underpinned by what sounds like a steady casiotone pulse.
Jim Jupp is unquestionably a singular talent - could I have heard my favorite album of the year already? I'm looking forward to hearing anything which can best this.