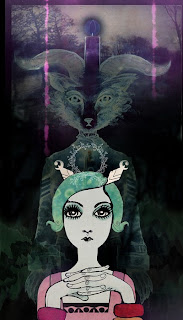 Great Albums You May Have Missed ( One That I Had )

Eagle eyed readers will notice that I've been on a bit of a Hauntology binge lately.  After sampling the delights of the Advisory Circle and Belbury Poly, it seemed that Moon Wiring Club was my next logical step.
I have it on good authority that the best place to start with them is a toss up between their fourth album Spare Tabby at the Wedding and their debut An Audience of Art Deco Eyes. If that's the case I'm going to be needing to find a copy of Art Deco Eyes very soon.
Moon Wiring Club's Ian Hodgson has a fairly unique approach to making his music. Entirely sample based, it's all patched together on an old Playstation 2 with a used copy of MTV Music Generator 2 from 2001. The results sound like they come from 1974 and 2030 simultaneously.
The oddness continues. Hodgson hit upon the fascinating idea that when you're looking forward to a new album from a beloved artist, you develop a dream idea of what the album's going to sound like, which is then immediately forgotten when you hear the real thing. Rather than leaving us with a sense of loss that we didn't even realize we had, he's provided us with two versions of the album. The CD and download version as the official release, and the vinyl version as a completely different dream version. 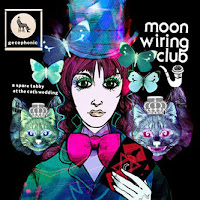 He's also spent a ridiculous amount of time creating an elaborate fictional village, Clinkskell, for his characters, whether they be sinister or sweet, to inhabit. Visit Blank Workshop with a mug of cocoa and a few hours to spare to check it out. It'd do Brian Clemens proud.
What's the music like you ask?  Where the Advisory Circle and Belbury Poly eased me into the genre with a more whimsical, pastoral take on electronica, the Moon Wiring Club are a decidedly beatier prospect.  Indeed there are tracks here that I can imagine being played in a club without the DJ getting the flaming torch and pitchfork treatment. Assuming you live somewhere where clubgoers still take these implements with them on a night out. 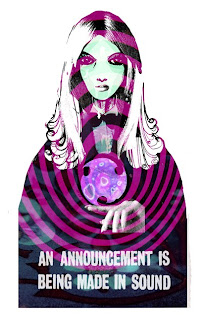 Its all very politely English, despite the percussion often verging on raw hip hop. Imagine what DJ Shadow's Entroducing would have sounded like if he'd been born in Hull and spent his youth watching the Tomorrow People and Children of the Stones instead of scouring thrift stores for David Axelrod records. If that mental image helps you, you're on the same wavelength as me ( be worried ) and should enjoy this album immensely, as I did.
Layers of vocal samples lifted from obscure seventies TV shows add color and texture, while the music alternates between waves of burbling radiophonics, fizzy analogue synth pop and the sort of aural fever dreams usually reserved for the stoic hero of Hodgson's beloved TV shows when they've finally worked out what's really happening in the village.
Riveting stuff for those of a particular bent.


BUY IT ON CD HERE