Maitreya Kali ( AKA Craig Smith ) seems like a pretty interesting geezer.
After starting off in the folk / pop field like so many others from this era, he found himself releasing a duo 45 under the decidedly unpsychedelic moniker of Chris & Craig. The b-side of this single, Isha was a fantastic piece of sixties pop, disguised as a fantastic piece of raga rock ( you can buy it here on the excellent ( and cheap ) Ah Feel Like Ahcid compilation ).
Chris & Craig evolved into the Penny Arkade, who recorded a number of very good demos, collected by Sundazed on the fascinating 2004 collection, Not The Freeze. Sharing the songwriting and singing duties, Smith's songs generally had more in the way of pop smarts, while Chris Ducey's were a bit grittier, along the lines of rockier Buffalo Springfield. 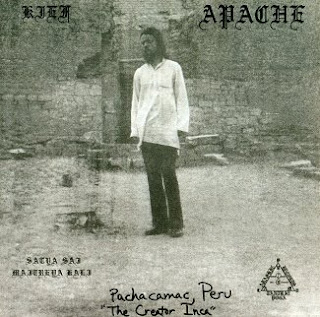 While they didn't manage to release anything as the Penny Arkade, Smith did pretty well for himself with songwriting royalties, with artists as diverse as the Monkees, Glen Campbell and Andy Williams covering his material.
When the Penny Arkade split, he used his royalties to travel the world - exactly where seems a bit of a mystery, but he certainly seemed to spend a lot of time in Latin America, and when he came back he was apparently... different.
It seems that the change of name came about when Smith realised that he was in fact the prophesied future Buddha Maitreya.
He put together Apache and Inca at this time, combining some excellent Penny Arkade tracks which show the clear influence of Buffalo Springfield, The Byrds and the Beatles with newly composed acoustic tracks, which are often compared to Skip Spence and Dino Valente, but have a more melodic quality to me, and remind me more of a halfway point between Love's Forever Changes and Rodriguez's Cold Fact - albeit a whole lot creepier than either of them ever managed. Slathering the album artwork with inscrutable religious symbols acquired on his travels, and filling the lyrics of his newer material with plenty of mystical hocus pocus, this was destined to become a cult oddity which would no doubt be held in much higher esteem had it been released in 1968 rather than 1971-1972, when the flower power kids had moved on and were far more interested in what the new Grand Funk Railroad album sounded like.
While the Penny Arkade and solo tracks seem to be at completely different ends of the spectrum they fit together surprisingly well, and make these two albums a fascinating listen, which sounds a lot better now than I suspect it did at the time. Indeed it's a wonder that the nu-folk brigade weren't all over this a few years ago, when Devendra Banhart and Joanna Newsom ruled the world. The only track which doesn't seem to fit is a version of Salesman allegedly featuring lead vocals by the Beach Boys Mike Love.
Fascinating and totally recommended.


We'll be back to the Dylan posts next time with Dylan's Eighties albums, after this momentary distraction.