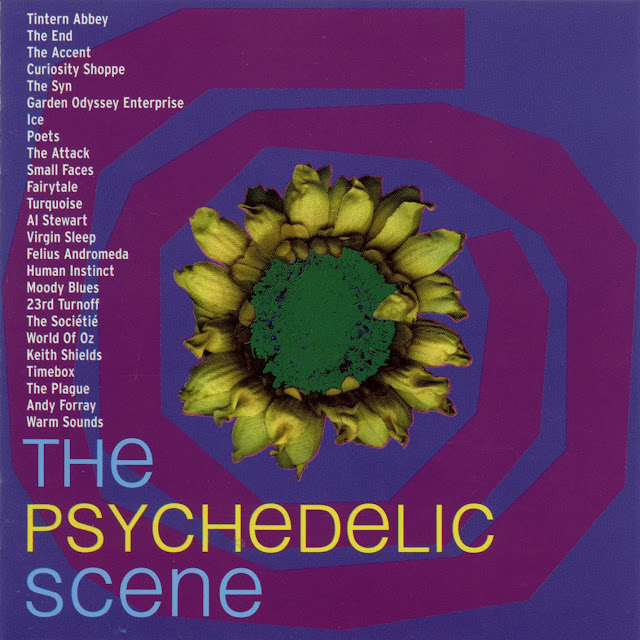 Originally set up in 1966 to release Decca records Deramic Sound stereo recordings, Deram quickly became Decca's primary outlet for underground and progressive artists, who could make the most of the shiny new 8 track recorders that began popping up around 1967 / 1968.
The Psychedelic Scene is a look into the label's diverse psychedelic output from these years with the odd releases from 1969 creeping in too. Where the previous volume in this series, The Freakbeat Scene ( also excellent and ridiculously cheap incidentally - see here ) focused on recordings from 1965 and 1966, with some pretty wild guitar sounds creeping in, The Psychedelic Scene highlights the first fruits of the U.K scene's immersion in Psychedelia. 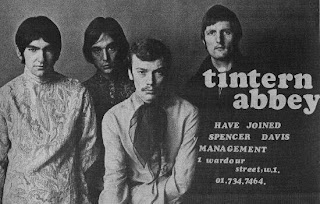 While early offerings from the Moody Blues and the Small Faces ( the excellent That Man ) are present here, the majority of featured artists are unknown outside of psych collecting circles and most of these only released a few singles, which just goes to show how fertile the scene was at this time, as this is a remarkably consistent and often groundbreaking set of songs.
Caught midway between the evolution from freakbeat to the more whimsical and slightly twee sound that U.K Psych would evolve into, this flexes a considerable amount more muscle than you'd expect. Just check out the Curiosity Shoppe's  Baby I Need You, all barnstorming drums, crunchy Who-ish power chords and cacophonous organs.
Tintern Abbey's Vacuum Cleaner is an early highlight with some great phasing, crashing cymbals and nice backwards guitar parts.

The Bill Wyman endorsed / produced The End provide Shades of Orange, a fine piece of gritty psych with slashes of electric guitar and some great period atmosphere.
Felius Andromeda add one part Monastic chants to two parts  massive church organ ( ala Whiter Shade of Pale ) for their bafflingly unheralded Meditations.
Also worthy of note is In Your Tower, an anthemic stormer from Scotland's excellent beat gone psych group The Poets.
Al Stewart outdoes the Yardbirds with his first b-side, a cover of their Turn Into Earth which sounds like someone's laced the holy water in an ancient monastery. The Yardbird's Paul Samwell- Smith oversees production duties, cranking up the gloomy atmosphere and accentuating the scratchy rhythm guitars.

The indisputable highlight, and one of the very best English 45's of the sixties is the 23rd Turnoff's majestic Michaelangelo, a hazy, psychedelic dream with waves of renaissance horns drifting in and out of focus. Sublime.
While the Nuggets II: Original Artyfacts from the British Empire and Beyond or Acid Drops : Spacedust and Flying Saucers box sets certainly offer a far more complete picture, this is one of the best single CD compilations of U.K Psychedelia out there. An ideal starting point.