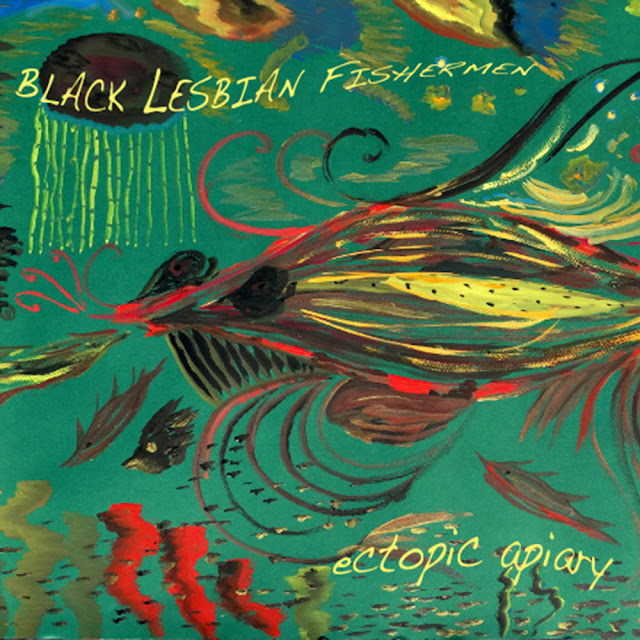 Hailing from Greece, Black Lesbian Fishermen are a mysterious collective that count Alan Trench (Orchis, Temple Music), Nikos Fokas, Stratis Sgourelis and Rebecca Loftiss in their number (the latter artist recording as a part of both the excellent Grey Field Recordings and Howling Larsons as well as the being the creator of the 'In The Cities Of Your Eyes' compilation in aid of Syrian and other refugees). The hazy psych of Howling Larsons gives some indication of the sprawling yet beautiful exploratory symphonies contained herein and the atmospheric experimentalism of Grey Field Recordings offers a hint as to the melodic but defiant disdain for boundaries or convention.

Opener 'Lignite Light' is a live take and one which captures the Fishermen in all their resplendent, kosmiche power and beauty. Chiming guitar lines weave lysergically into backwards effects before merging with flute and resonating E-bowed strings in a grandeur that recalls both 'Saucerful of Secrets' era Floyd and the majesty of Japanese psych legends Ghost. The sounds are vast and yet comforting, the sense of a dark yet tranquil solar emptiness above us is eerily present throughout. At ten minutes this track is an epic and bold statement of intent; the Fishermen's stall is firmly and truly set out. 'LIL' begins with queasy dread filled keyboards, gong and percussion, conjuring up a possible soundtrack to an unwritten Alejandro Jodorowsky film. Spoken word vocals intone before ominous bells peal and a cosmic wind gathers pace to be joined by Rebecca Loftiss's flanged vocals. It’s both hugely effective and unsettling, the sound of some extraterrestrial apocalypse. Next, 'Ragged Ritual' enters with a Nico-esque Eastern harmonium, Loftiss's voice echoing alongside esoteric percussion and processionary, regal and solemn keyboard and guitar refrains. Drums and bells appear through the haze as a seriously tripped out voyage of guitar voyage, ever building and ever searching. Reminding this listener both of Popol Vuh and Godspeed You Black Emperor in its precise yet exploratory guitar lines and pervading sense of ever layering and building repetition this is nonetheless an utterly unique recording; the Fishermen conjure sounds from darkness that sound quite unlike anyone or anything else you'll hear. The pace quickens and molten, distorted bursts of lead guitar scream like comets through the sky. It's both exhilarating and utterly hypnotic. Meanwhile, 'White Reptiles', with its angelic choirs and doom filled metallic guitar coasting over a shuffling beat, continually grows in intensity and circles with a sense of unease; a dark pulsar of a song. Loftiss's voice drifts throughout as if in a dream, adding a further hallucinatory edge.

Another extended live take 'All in the Green' is introduced by oscillating analogue keyboards and a strident bass line. Shimmering strings and chimes blanket the song as it begins its strange exodus to the stars. Bursts of fiery and incendiary guitar interjects as an otherworldly organ journeys further and further outwards into the void. The album finishes with 'Ice', an unearthly crackling and haunting siren beginning the song as bells toll and a slow, stately drumbeat and bassline emerges. As vintage synth sounds wail and tear across the canvas, a proclamatory voice talks of 'ancient skies' and the effect is virtually hypnagogic; it feels like you are dreaming this music.

The band members have an impressive history and catalogue with their other projects, however Black Lesbian Fishermen stand in their own right as a mindblowingly impressive psych band that firmly command their own distinctive and transportive sound. For fans of 'Warrior on the Edge of Time/ Hall of the Mountain Grill' period Hawkwind, the afore mentioned Popol Vuh as well as kosmiche artists such as Sand and Amon Duul, this is a must. Seek this album out, lie back, close your eyes and drift off into the most unsettling yet beautiful dream you may ever have.

Available now via the artist’s Bandcamp page and as a very limited CD edition (there are very few remaining so please email dagbert58@gmail.com first to check availability).