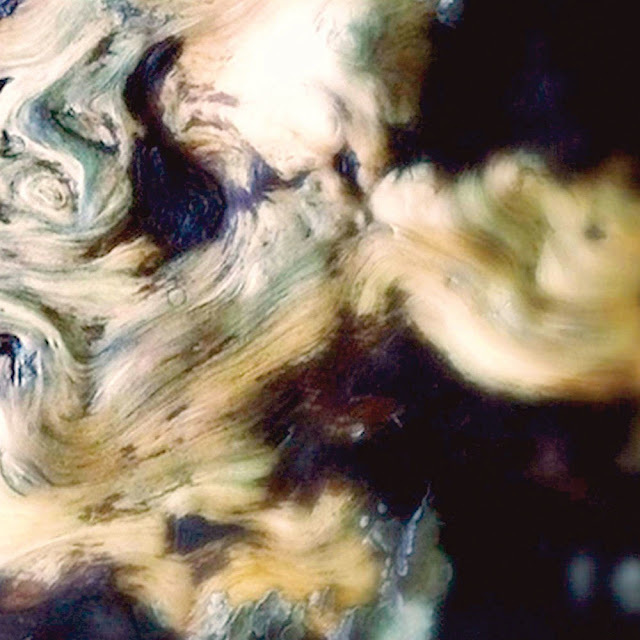 From the superb Deep Water Acres label (also home to recent splendid albums from United Bible studies and Raising Holy Sparks ) comes the sophomore album from Prana Crafter, essentially Washington Woods guitarist William Sol. As with Prana's impressive self-titled début this album is mostly entirely written and performed by the man himself, this time around aided by Chris Shealy on drums and with additional lyrics by Tara Sol. Recorded in the vast forestlands of his home, the album bleeds rustic charm and backwoods magic; Sol is a highly accomplished and deeply emotive artist who deserves a wide audience for his fusion of acoustic wonder and fearsome blasts of acid tinged psych guitar, 'Rupture Of Planes' should surely be the album to afford this much deserved recognition.

'Forest at First Light' opens the album with delicate, finger picked acoustics, Sol's plaintive and warm vocals entering to add a shimmer of Mercury Rev and early Neil Young to proceedings before the familiar fiery bursts of fuzz guitar enter and send the song skywards. It's a heart stopping moment and encapsulates the sheer vibrancy and life that is inherent in Prana Crafter; this music breathes, bleeds and lives. Closing with Sol's fragile voice repeating the refrain 'one can never really stay' it is a hugely evocative opener to an equally atmospheric album. 'Diamond Cutter of the Jagged Mountains' merges melancholy and solitary acoustic notes with swathes of burning, molten guitar that hovers crackling and twisting over the steady rhythm of the drums and the growing synth strings. Echo and feedback shimmer around massed waves of six string attack, recalling both Tenderness of Wolves era Six Organs Of Admittance and Arc/Weld period Neil Young. This is a guitar album, make no mistake. Next, title track 'Rupture of Planes' is a reflective and highly melodic piece of classic psych that soaks up the darkest of Americana and adds the heartbreaking sheen that Prana Crafter effortlessly cloak their music in. Following this, 'Moksha of Melting Mind' starts with waterfalls of cascading notes over which heavily distorted guitar and insistent bass drive ever forward into a swirling psychedelic dream, guitar lines spiralling and echoing through the woods, across the hills and into the forests. There is almost something ritualistic about Prana Crafter; something of a ceremony around their music as it builds into both fury and beauty.

'Tara, Do You Remember the Way' by contrast is a gorgeous reverb drenched, late night ballad. Both haunting and affecting, one can almost picture the vast star filled skies overhead; this music conjures pictures and landscapes. 'Treasure In A Ruin' begins with carefully picked, chiming notes and an ominous, deep and distorted guitar melody; the veritable calm before the storm, something approaching in the air and the rustling of the trees. Keyboard and strings glisten and layer, building the sense of controlled tension and anticipation as the storm passes by with shudders of guitar and growing, unsettling drones. In amidst the fury and the tension however, as always with Sol's music, there is an overarching beauty, just as there is in the nature he surrounds himself with when writing and recording his music. 'Dharma Dripping Lotus' is a meditative and gentle flickering candlelight; acoustic guitar cascading and looping around melodic runs and a hazy, oscillating background of strings. The skies darken with synth notes and hugely exciting, corrosive bursts of guitar until the sun appears again with organ and a Floydian sense of warmth and reflection.

'Vessel' is a beautiful and heartrending slice of autumnal magic (Sol's voice is a large part of this; the man can bring tears to your eyes with a simple line or sentence) whilst 'Birth Of Blooming Thunder' evokes the sound of standing under a thundercloud as the sky and land crackles and vibrates around you, various guitars employed in seamlessly layering the growing hubris and storm. Next, 'Fog Has Lifted' reassures, another late night gem of gentle, nostalgic and warm melancholy which is then followed by 'Prana Crafter's Abode', a seriously atmospheric, twinkling mood piece that drifts and flows carefully and deliberately towards a lovely, light of dawn ending. The album closes with 'Mudra Of The Mountain Throned' which combines solemn and processionary guitar arpeggios and organ with huge flares of Earth style acid guitar in the most thrilling and, again, alive ending to an album that as a whole stands as a significant achievement; very few people are making music as ambitious, genuine and essential as this.

Echoing from the forests of Washington this then is the sound of Prana Crafter; your life and record collection is all the poorer for not seeking this out. Take a walk into the trees and inhale the smell of the pines and the evergreens, surrender to the Rupture Of Planes.

Available now as a CD in a beautiful gatefold sleeve from Deep Water Acres and to stream at Prana Crafter's Bandcamp page: