The Heartwood Institute - The Wild Hunt of Hagworthy 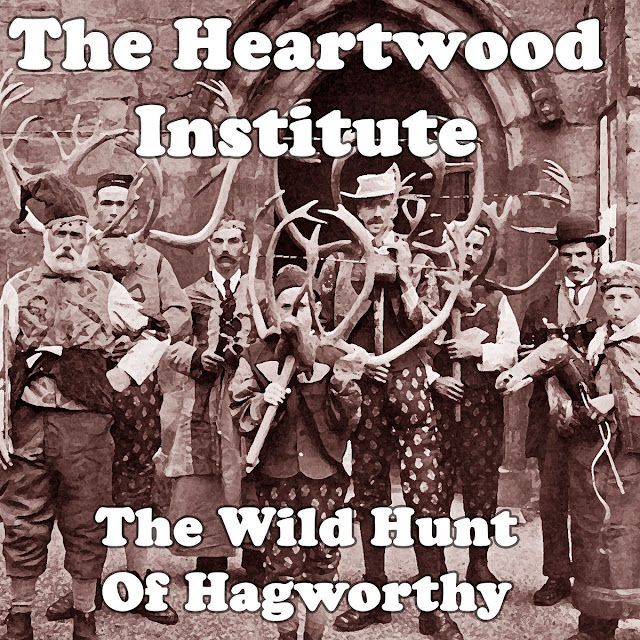 The Heartwood Institute (aka Jonathan Sharp) has been at it for a little while now and unlike some of his contemporaries he remains on the upgrade. This is due in no small part to his constant redrawing of his own boundaries and willingness to venture beyond the sometimes rigid diktats of many of the hauntologists operating at present.

“The Wild Hunt of Hagworthy” is his second official crack at interpreting the work of celebrated novelist Penelope Lively, the title cribbed directly from her third novel published in 1971. His last release “Astercote” (which you can read about here) meted out similar treatment to her first book (1970) in a highly entertaining way. As with the previous reimagining project, Sharp has a stated intent to “to create a soundtrack as it might have sounded at the time of the original publication.” I am pleased to report that it is mission accomplished on this latest outing and that there is an increased degree of sophistication and widening of the sonic palate in this latest venture that really pays off as The Heartwood Institute have delivered a new sonic delight that is a stunning achievement for its creator.

Over the course of its 30 sonic ‘chapters’, “The Wild Hunt of Hagworthy” takes the listener on a journey of instrumentally driven suspense and revelation. It takes the listener on a journey that alternates between the kind of sound pictures that the BBC Radiophonic Workshop would compose to accompany the roster of kids/adults suspense/sci-fi/horror tv that flooded the homes of millions in the 1970’s; takes a few floral segues into Maypole/Morris Dance territory that would make Lord Summerisle himself believe the apples would grow this year without recourse to ritual slaughter; via a few kraut-y drones and a bagful of Boards of Canada inspired gently disturbing electronica. This keeps the listener always slightly off-balance and each piece is rarely long enough to ever begin to wear out its welcome. Sequencing is critical to these types of ventures and here it is expertly handled to create a story in sound that has coherence and a wordless narrative that breathes and speaks to the active listener. At its denouement you a have a remarkable sense of satisfaction that you have been on a worthy trip and are left pondering what the next adventure will bring to the table.

With this release Sharp has transcended his roots and moved up a level; developing a hybrid that does not cosily sit in one genre but pinches liberally from many to serve up an intriguingly complex and restless world that I am sure does the source material much service. I am off to find a copy of the book now. Don’t wait up, I may be gone for some time.

Available right now from The Heartwood Institute bandcamp on download.