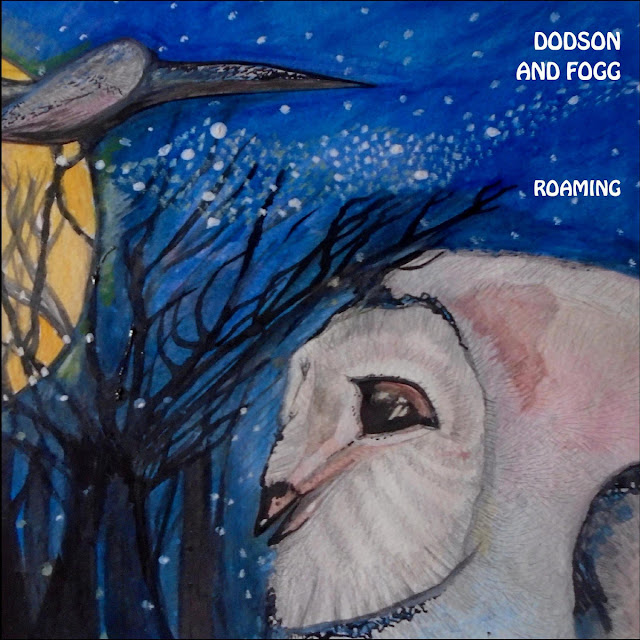 Dodson And Fogg, essentially the project of mainman Chris Wade with a cast of colourful and talented contributors, returns with 'Roaming', the band's ninth album (or tenth counting last year's superb joint Chris Wade / Sand Snowman release 'Tell The Trees It's Autumn Again'). This fine collection of psych jewels offers yet more of the song writing nous, wit, quirks and genius that Wade instils in every one of his recordings from Dodson to his work with Rainsmoke and Rexford Bedlo. For a while criminally underrated, Wade and Dodson’s star now seems to be on the ascent and this album can only serve to draw more, much deserved attention.

The album opens with the title track, a determined sounding acoustic guitar giving way to Wade's glorious vocal harmonies to create the dual uplifting/melancholy essence of Dodson And Fogg. A uke solo lifts the song to a higher plain and there is a wide-screen, journeying ambiance that is almost tangible (and reminds this listener of the Fleet Foxes epic 'Helplessness Blues'). Continuing with the sense of being transported forwards into an ever increasing horizon, 'I Could Tell You The World Is yours' is a wickedly contagious and propellant track that combines distorted fuzz guitars with whip fast acoustic arpeggios and Wade's almost deadpan yet hugely emotive delivery. 'For a While' slows the pace, a gorgeous sprinkling of chiming guitars and backing vocals by none other than Nigel Planer (of The Comic Strips presents/ Young Ones fame) framing a wistful piece of perfect psych pop. A darker hue is suggested by 'The Best in Me', ominous minor chords and Celia Humphris's (of acid folk masters Trees) evocative backing vocals. Wade can dip into and evoke a wide range of emotional reactions with his songs with apparent ease, an inflection or turn of phrase turning a deceptively upbeat song into something altogether more nostalgic, sepia tinged or vice versa. 'Book of Rules' is a case in point, ably switching from something Bolanesque and stridently positive to something altogether more mysterious and cosmic with sudden change in gear, a hint of mandolin and some carefully positioned vocal harmonies. Each of these songs is a mini symphony in itself; you have to hear just how in control of his craft Wade is, how on top of his game this modest singer songwriter currently is (and I don't mind repeating again and again, he is by far the country’s leading psych artist). This is not to suggest that these songs are clinical or contrived in any way; quite the opposite, they crackle and burn with creativity and the sheer joy of bringing this music into the world. 'I'm Running Out Of Patience Now' demonstrates this with ease; there are more melodies and ideas in this song that some artists manage in a career.

'Pulling faces' introduces tabla (much of Dodson's output works without the use of drums which gives the music a notable and effective sense of floating and otherworldliness) whilst 'Always Looks Like That' adds some truly beautiful harp and chimes to a song that is pure Canterbury scene in its hazy, English riverside reverie. 'Yesterday Man' is the classic slice of British psychedelia that Damon Albarn has been trying to write for the past 25 years. This is followed by 'Rain Clouds' which takes a leaf out of Village Green Kinks territory with some acid folk flecked flute from Georgia Cooke thrown in for good measure, resulting in an album highlight. 'Roaming 2' begins with the sound of a telephone being answered and a reverberated eerie vocal from Daisy (of Daisy And The Dark) as fellow long-time collaborator Ricky Romain sprinkles some of his essential sitar work across a building and growing sense of solitude and the open road, guitar rumbling and echoing as the tension builds to height after height. The album finishes with 'Silver Bay', an arrival at a destination of sorts with the sound of gulls and waves leading into a reflective and magical acoustic meditation. Written with partner Linzi (who also contributes the stunning sleeve art as she often does with Dodson releases) this is the essence of Dodson distilled; melodic, English psych with a Syd Barrett sense of unease and an undercurrent of rainy day sadness. And then we are left to scratch our heads and wonder how Wade can continually do this; prolific yet with a stringently high sense of quality control, this album of gems simply adds to the riches already stockpiled in Dodson's back catalogue.

This is an essential listen for lovers of classic 60s psych pop, The Kinks, Bolan, Barrett and for those enamoured of beautifully constructed nuggets of psychedelic wonder. I trust this refers to you; if so then it is time to go roaming with Dodson And Fogg.