The End - From Beginning to End (Four Disc Box Set) 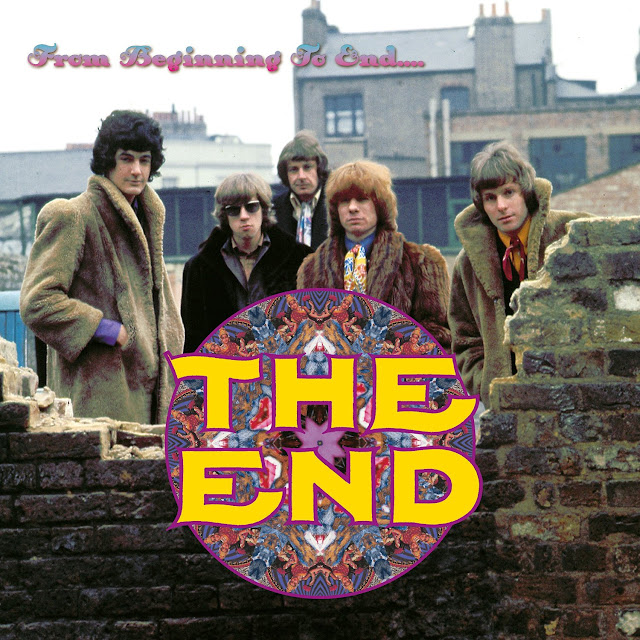 Though they only released one studio album in their short lifetime, UK psych pop outfit The End were unusually prolific in the studio - prolific enough to warrant this attractive, new four disc box set chronicling their complete (or near complete) studio activities.

The End's sole album "Introspection" constitutes disc two of this set and is now regarded as a minor (major to many) classic of UK psych, despite being virtually ignored on its original release. It's been written about extensively elsewhere by writers far more eloquent than I, so all I'll say about it here is that it's one of the very best of its ilk, and if you haven't discovered it already, you're missing out bigtime. Presumably the majority of you are familiar with "Introspection" though, so let's turn our attention to the contents of the other three discs here, "In The Beginning", "Retrospection" and "The Last Word". Originally compiled and released (on vinyl only) by Tenth Planet between 1996 and 1999, the majority of material on these three discs is officially on CD for the first time here.

"In The Beginning" sounds like the early works of a lot of bands of the era. Searching for their own identity in a rapidly evolving scene that sees them try their hand and beat, mod and R&B, these early recordings are promising but unspectacular. Glyn Johns liked what he heard though, and called in Rolling Stone Bill Wyman who took the band under his wing and produced the works contained on discs two through four here (as well as co-writing the band's classic single "Shades of Orange"). "Retrospection" contains unreleased material recorded during the "Introspection" sesssions, as well as sundry singles from the same timeframe, and shows a much more confident band with even the most casually off-the-cuff performances here boasting superb harmonies and interesting arrangements. It certainly doesn't sound like a disc of offcuts, with plenty of strong material and only a few overlaps with "Introspection" tracks, which are alternate mixes that are intriguing enough to warrant their inclusion.

Things really heat up with "The Last Word" though. Consisting of tracks recorded between 1969 and early 1970, this really does feel like a lost album, and a particularly good one at that. Opener "Son of Lightning" has a great late Beatles feel to it, along the lines of the Tremeloes circa "Master" and "(Call Me) Number One" with flurries of flute that suggest Traffic as another influence. It's also much heavier than anything found on the previous three discs, with some nice doomy proto-prog moves on the dramatic "Second Glance" incorporating the band's strong vocal harmonies comfortably, with a claustrophobic, multilayered climax that reminds this listener of the Pretty Things' "Parachute". As a propsed album, it's perhaps one or two tracks short of meeting the consistent high quality found on "Introspection", but those are some very big shoes to even consider filling, and compared to other artists of the era's released work, this is very, very fine indeed.

"From Beginning to End" is an essential portrait of a band that could have made it big if things had aligned slightly differently for them, and it's an absolute steal for the single disc price being asked. Available here (UK/EU) or here (US).