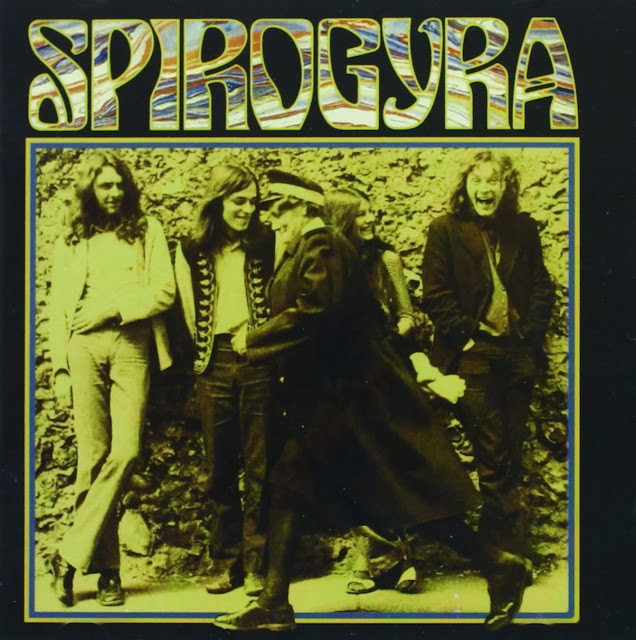 Not to be confused with smooth jazz near-namesakes Spyro Gyra, this outfit were one of the more interesting progressive folk groups to emerge in the early seventies.
Freshly reissued by Esoteric Recordings, their three studio albums form a solid body of work with distinctive identities of their own.
Spirogyra's lack of commercial success almost certainly had more to do with expectations than it did with the quality of their material. In the early seventies, the Canterbury sound was already synonymous with quirky, jazz tinged prog as epitomized by contemporaries like Caravan, Gong and Egg - a stereotype that Martin
Cockerham's politically charged, anglicized take on Dylanesque folk failed to emulate.
B&C offered a recording contract shortly after Steve Hillage suggested the pure vocal tones of Barbara Gaskin might prove an able foil to Cockerham's more brusque vocals, and debut "St. Radigunds" promptly appeared in 1971. A near classic debut with Fairport Convention's Dave Mattacks (who also appeared on subsequent albums) adding some solid boom-thwack to these mostly acoustic tunes. Cockerham's voice dominates the first half with "Captain's Log" accentuating his occasionally Roy Harperesque gravitas, which is at it's best when harmonizing with Gaskin on the likes of "Cogwheels, Crutches And Cyanide". Violinist Julian Cusack also makes his presence felt strongly, with "Island" in particular boasting a playfully sinister St Vitus Dance that will make fans of Comus feel right at home.
1972's "Old Boot Wine"saw them move to the Pegasus label, and into a more rock-orientated and straight-forward direction with more emphasis on electric instrumentation, the odd Germanic groove, and on opener "Dangerous Dave" a heightened awareness of vocal hooks that would much later find an unlikely parallel in (weird connection alert) post-punk. Cockerham's intense vocal contributions were also pared back, and Gaskin given more of the spotlight, which certainly makes the album an easier listen than "St Radigunds", although the debut almost certainly has the edge in terms of material.
Come 1973 and Spirogyra find themselves whittled down to a duo of Cockerham and Gaskin (who are also now a couple) and signed to Polydor for their swansong, which many fans consider their best. A return to the more acoustic based instrumentation of their debut with additional brass and string arrangements emphasizing their most grandiose set of songs, "Bells, Boots & Candles" is certainly their most progressive outing with lengthy opener "The Furthest Point" gracefully setting the tone for "In The Western World" - a hugely  ambitious four part suite that may well be the best thing they ever recorded.
After being shown the door by Polydor, they were unable to find a label to record the reputedly excellent and much edgier tracks they'd assembled and toured with a new lineup in early 1974 and went the way of so many other underpromoted bands of the era, leaving an underappreciated but impressive legacy behind them.