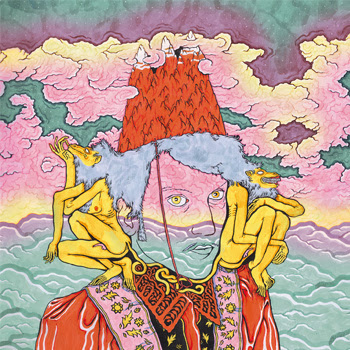 Beneath the make-up and wonderfully extravagant attire of Moodoïd in his recent videos lies a face you may have encountered before (or not - that all depends). This is the face of Pablo Padovani, a French multi-intrumentalist better known as the guitarist for Melody’s Echo Chamber. His self-titled debut E.P. is about to change that.
Released in September via Les Disques Entreprise, Pablo’s output under the pseudonym Moodoïd has more in common with Melody’s Echo Chamber than a band member and origins in France. Cue Kevin Parker of Tame Impala, the ever prevalent, ever talented force responsible for mixing the records of both. Although comparisons will inevitably be made between the reverb-laden psychedelic sounds of all three acts, it’s clear that Moodoïd’s unique blend of world music and psych-pop situates him firmly within, well, a world of his own.
The opening track, and first single to be taken from the E.P., establishes this from the outset. "Je Suis La Montagne" begins with a languorous drum beat and lovely, lilting guitar (so many L’s) that becomes characteristic of Moodoïd’s sound. The vocals echo out dreamily, creating a sublime arrangement where all the parts seem to melt into each other and you can’t help but sway along. It’s worth noting that the tracks on this E.P. are sung entirely in French, but in no way does this detract from the listening experience if (like me) your understanding of the language barely surpasses "Mon anniversaire est le –insert birthday here-". Rather than creating a barrier, it seems no other language but French would work on this record. It presents the best possibilities for Padovani to experiment with sounds and rhythms in order to convey the narrative images of a song. Plus, it just makes the whole thing all the more unique and enjoyable.
I highly recommend giving the video to this single a watch – the barrage of delightfully odd images, colours and characters are strangely mesmerising and strangely appropriate to the song. (What’s not to love about a mountain man, lots of glitter and a little nudity all in one place? I’ve got a strong desire to try that blue dessert...)


The slow percussion and use of synthesizer is more prevalent on the E.P.’s second track "La Chanson du Ciel de Diamants". Here the inclusion of female vocals works well, and the tempo changes add intrigue to the already languid and mysterious atmosphere. Most notable on this track however is the jazz influence that begins to creep in through the building percussion and horn section. Unsurprisingly, this may be the result of having a prominent jazz saxophone artist for a father – Jean-Marc Padovani. Exposure to this music from a young age has undoubtedly influenced Pablo’s debut E.P., but he threads this together with numerous other influences to create his own distinct sound.
Following this is the second single to be taken from the E.P., "De Folie Pure", which pops from the record like a firework. Here the inspiration Padovani takes from world music is most evident, through the guitar and sitar melodies and high-pitched female vocals that nod towards the soundtracks of Bollywood/Lollywood cinema. (For some reason I imagine a 60’s crime caper set in China or Japan…) It’s a vibrant, upbeat song that is almost impossible not to move to, and again, it’s accompanied with a similarly vibrant video that captures the slightly-bizarre-but-enjoyable-party feel of it. During one section, the entire song threatens to unravel and fall apart completely (in a good way) with the Samba-esque drumming and re-appearance of that saxophone. It’s a wonderful burst of controlled musical chaos (which you can view here).
Closing the E.P. is "Je Sais Ce Que Tu Es", a slower and beautifully sublime track that is quite possibly my favourite on the record. It opens with some surprising vocal harmonies that immediately recall Dirty Projectors, and leads into that characteristic guitar sound, jazz percussion and whirring synth. It is here that Padovani best showcases his obvious talent for creating interesting and complex song structures, the tempo shifts again adding an unexpected element. (I have to pinpoint a specific moment on this track – the 1:15 mark. That guitar that comes in. That sound. It brings a smile to my face every time.) After several minutes the song unravels into a more haunting section of cymbal splashes, dissonant piano keys and snatches of howled vocals that reminded me of the opening to Connan Mockasin’s "Forever Dolphin Love".
In fact, parallels between Moodoïd’s E.P. and Connan’s 2011 L.P. could go beyond their innovative takes on psych-pop. Both artists have an uncanny ability to produce not only their own sound but their own world; combining the aural with the visual to create one that is distinctly theirs. Moodoïd’s video for "Je Suis La Montagne" is similar to the one for Connan’s "Forever Dolphin Love" in its use of unusual characters to either convey the song’s narrative, or suitably reflect it. Even without the videos or an understanding of French, Moodoïd’s E.P. succeeds in immersing the listener immediately into his world, and by the end you don’t want to leave. By the end you'll realise you’ve fallen in love with it.
Padovani’s ambition and willingness to experiment has certainly paid off on his debut E.P., resulting in an unexpectedly complex yet hugely enjoyable record that blends influences from several genres and global locations. Go listen to it on the basis that you probably haven’t heard anything like it this year. I hope we’ll be hearing a lot more from Moodoïd.

Moodoïd’s debut E.P. can be downloaded from their Bandcamp page: