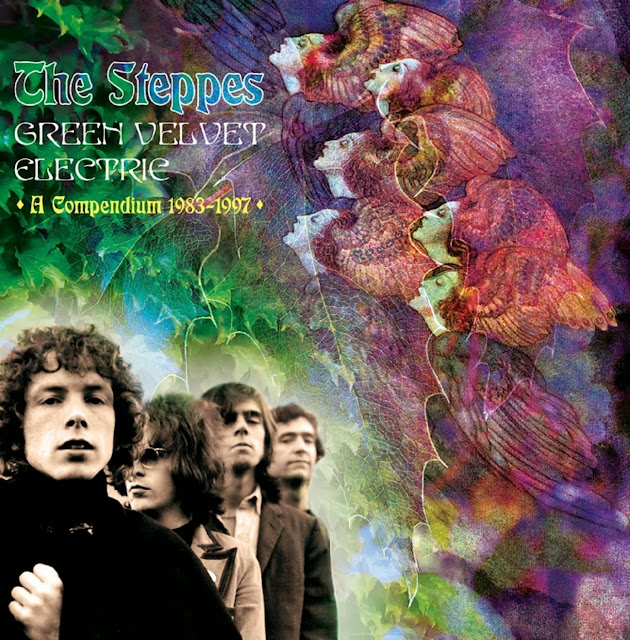 Cherry Red are to be congratulated for this long overdue and extremely well selected overview of one of the eighties most important psychedelic bands. Amazingly, aside from an extremely rare Bam Caruso compilation early on in their career (in 1988), this is the first time anyone has anthologized the Steppes impressive back catalogue, a task I don't envy of the compilers - what to leave off rather than what to put on being the dilemma when faced with such a solid body of work.
Sensibly enough the compilers have realized that they require at minimum a two disc set to do the band justice, and the 41 tracks selected within paint an impressive picture of a band who had everything that they should have needed to be huge. There's an emphasis on their groundbreaking early work (including ten tracks from the classic debut "Drop of the Creature"), and a nice range of tracks from their later albums, right up until their final album in 1997.
Based around the talents of the Irish-American Fallon brothers, the Steppes were a force to be reckoned with right out of the gates (as the three tracks from the debut E.P here rightly attest), but being lumped in with the nascent Paisley Underground scene didn't do them any favors, with their early outings influenced as much by the Jam as the Beatles and bearing little resemblance to the Byrds influenced folk rock being peddled by other L.A based Paisley Undergrounders. This U.K influenced sound struggled to find the audience it deserved with tracks like the predominantly acoustic "Somebody Waits" paying tribute to their Irish background, while moody rockers like "Holding Up Well" could have come straight from "The Man Who Sold The World" sessions.
Tim Gillman's fluid John Cippolina influenced guitar work helped to Americanize the sound a little, adding a healthy dash of West Coast psychedelia to their Celtic tinged psych pop, which became more pronounced on later albums which headed in a heavier psych direction with a heavy Jimi Hendrix influence.
There's too much material on this sprawling set for me to offer any sort of even near-complete analysis of what the Steppes accomplished but it's all here, everything that seemed possible in eighties and nineties psychedelia at it's very best, commercially hamstrung only by being in the wrong place at the wrong time.
Compilation of the year? Quite possibly, and at the very least a vital education for the psychedelic listener who wants to broaden their horizons into an era not traditionally recognized as rewarding for the aficionado.