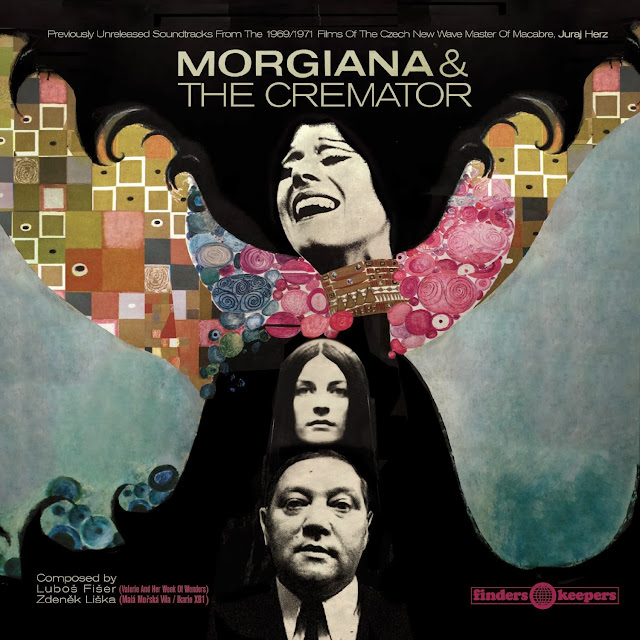 Reviewed by Grey Malkin (The Hare & The Moon).


Previously unreleased, the soundtrack to two of the Czech New Wave's greatest (and, in the case of "The Cremator", most notorious) films have finally been made available by the splendid Finders Keepers label. Finders Keepers have been singular in their admirable determination to ensure that the few dedicated souls passionate about this under sung but crucial moment in European cinema history can enjoy the accompanying music, be it the dark Victoriana of "Valerie And Her Week of Wonders" or the jazzier, contemporary Euro-pop of "Saxanna" (the original teenage witch).


"The Cremator" and "Morgiana" are stylistically and narratively two very different films but they are united in their vaulting ambition and early employ of magical realism along with some of the most incredible cinematography you will ever see. What was in the water in Czechoslovakia in the 1960s?


"The Cremator" is a monochrome allegory involving the eponymous character who, obsessed with the afterlife and his own increasingly demented moral code, carries out atrocities first against his fellow men and then finally his own family. There are obvious references to Nazi Germany and the Czech experience of communist oppression at the time cannot be underestimated when considering the film's social commentary (a number of "The Cremator"s surrealist elements were a deliberate attempt to fly under the censor's radar). A chilling and understated film, it contrasts with the more flamboyant and gothic styling of other Czech gems such as "Valerie" or the day glow anarchy of "Daisies". Instead "The Cremator" is more akin to German Expressionism or Bergman's darker, more nihilistic portrayals of what it means to be human.


Composer Zdeněk Liška's previous work on another Czech classic "Malá Mořská Víla" (The Little Mermaid) was a stunning mix of electronics and baroque orchestral work, filled with harpsichord and chimes.  For "The Cremator" he employs an almost fairy tale like sense of magic and wonder in the use of choir and playful strings, quite at odds with the dark undertow of the movie but deliberately underscoring the increasingly unsettling mismatch of the protagonist's deranged world view and his respectable appearance. Hints of darker goings on begin to emerge from more conventional passages as the music itself indicates that behind the publicly acceptable and polite persona "The Cremator" is both sociopathic and deeply insane; merry-go-rounds and oompah segue into off- key trumpet squalls as both the film and its accompanying soundtrack reveal the dark heart of our narrator.


"Morgiana" was arguably the final film of the Czech new wave and also one of its finest. Communist occupation would eventually result in the country's film industry being under strict government control, effectively calling a halt to what was arguably one of the most unique, creative, colourful and surreal movements in cinema history. Essentially a gothic tale of two sisters (one good, one very bad) and featuring a stellar performance in both roles by Iva Janzurova, "Morgiana" is a psychedelic gothic masterpiece that rivals that other Czech classic "Valerie And Her Week of Wonders" in its sumptuous photography and costumes. The hair is big, the eyeliner thick and the out of time Victoriana of the costumes both evocative and creepy.


Prior to "Morgiana", Luboš Fišer had already scored "Valerie", quite simply one of the all-time great soundtracks with its use of strings, clockwork sound effects, harpsichord and choirs. Enchanting and fairytale like but also at times menacing and melancholy, the soundtrack has gone on to influence a wide range of artists from Espers to Broadcast to my own pop combo The Hare And The Moon. Fišer’s music for "Morgiana" immediately takes a darker tone, befitting the film, but the twisted waltzes and bells evoke much the same otherworldly and magical atmosphere as his soundtrack to "Valerie". Occasionally a tense and ominous trumpet fanfare echoes some of the Hammer soundtracks of the same period and in some respects "Morgiana" is in the mould of those glorious Technicolor horrors. But within both soundtrack and the film there is something deeper at work here, different to its British or Western European counterparts, something timeless and with a melancholy not present in your typical gothic flick.


The Finders Keepers CD release offers a burgeoning booklet of articles on both films and the cinematic movement that they were a part of. Separate vinyl releases for each soundtrack are also available and lovely they are too. Highly recommended, treat yourself and enter a different world.

The CD featuring both soundtracks is available here (at a great price).

The vinyl soundtracks are available here.

Soundcloud samples below (please refresh page if these aren't visible).

Email ThisBlogThis!Share to TwitterShare to FacebookShare to Pinterest
Labels: Grey Malkin, Reviews, The Hare and the Moon