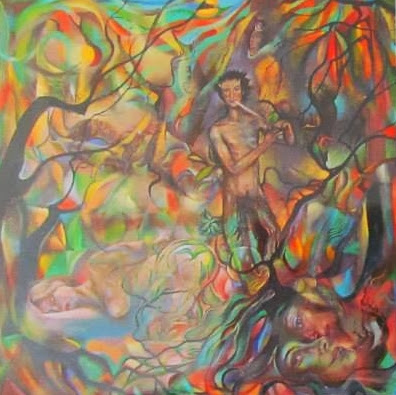 The artist known as Sand Snowman has been quietly and prolifically releasing slivers of beautiful, psychedelically tinged folk into a mostly unsuspecting world for almost a decade now. Highly collectable and treasured by the few, Sand’s music has been available on a number of limited press and self-released albums as well as on major underground labels such as Beta-Lactam Ring and Tonefloat. Although often hidden behind a variety of vocalists and something of an enigma, Sand’s reputation has been enough to attract the likes of Steven Wilson of Porcupine Tree to work with him (review here) and on latest release "Sleeper’s Hide & Seek" he likewise assembles a strong cast of players, more of which later. The album, originally issued by Sand himself as a download in 2010, is his second in as many months on the splendid Reverb Worship label ("Autonal", a brand new recording and duet with partner Moonswift being the first). The album comes as a limited run CD and is housed in incredible artwork by Sand himself, featuring a cast of dreamers in a wood being serenaded by Pan. You will need to be quick (and lucky) to find a copy.
The album awakens gently with "Sleepwalker’s Seal", flutes and harmonies creating a magical atmosphere reminiscent of Luboš Fišer’s "Valerie And Her Week of Wonders" soundtrack. However there is nothing somnambulistic about the following tracks; instead, a range of percussion, tabula and voices converge to create a swirling, carnivalesque and wild eyed mood. Even acoustic moments like "Wide Awake" are tinged with discordant effects and unearthly voices whilst the drunken strings and off-key lurches of the Wicker Man-like "Fractal Fever" suggest that, if these are dreams, they are particularly uncanny, nightmarish and haunted ones. There is no peace in sleep here.
After these night terrors, the second half of the album shivers into a more ghostly, nostalgic landscape. The Syd Barret slide guitar of "Sound of Spirit" provides a moment of relative calm; however the tension and edge to the music remains. This is not easy listening folk. A sense of loss permeates "One More Spring", it's lonely piano refrain echoing whilst a frozen wind whistles around the notes, before this leads straight into "Me & The City" which itself could be from the soundtrack to a particularly melancholy 1960s European arthouse film. Undoubtedly there is a timeless sheen to Sand’s music; this album could have been made at any point in the last thirty years.
Overall, "Sleeper’s Hide & Seek" has a fuller sense of instrumentation than on recent outing "Autonal"; acoustic and electric guitars, bells, xylophone, organ and a range of effects and treated sounds create a different (though complimentary) addition to Sand’s previous work. However as is usual with his music, Sand also employs here a range of vocalists to accompany his lysergic lullabies. On this album regular collaborator Moonswift joins a number of contributors including folk luminaries Bobbie Watson (Comus) and Judy Dyble (Fairport Convention, Trader Horne). The result is spellbinding; although different in their approaches, these singers manage to weave a familiar and consistent thread throughout the album.
In a just world this recording would be widely acknowledged as a modern psychedelic masterpiece; however it will more than likely remain a best kept secret, an antidote for those in the know to the malaise of more mainstream and unfairly feted Mumford-style folk stars. Be in on the secret, you need this album. Wake up to Sand Snowman.