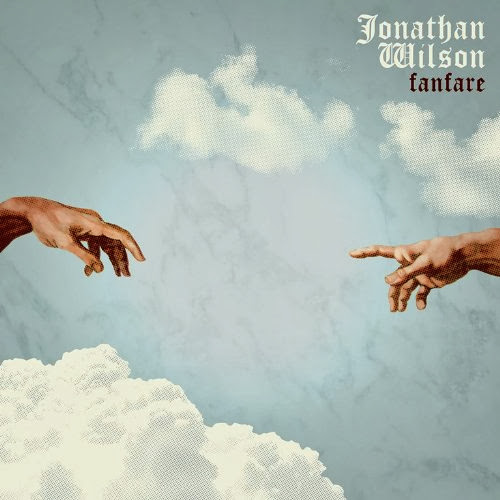 Laurel Canyon wunderkind Jonathan Wilson made an album in 2011 that quietly captured a lot of hearts by being exactly what it set out to be; a sincere tribute to the Laurel Canyon scene of the early seventies without a single trace of pretension.
And while "Gentle Spirit" was (just as it's name implies) a mellow communal singer songwriter album with an unhurried grace that gradually wormed it's way into your subconscious where it was invariably welcomed to set up shop for as long as it saw fit, it's follow up "Fanfare" is aware that it's going to have to work a bit harder, which it does without a hint of it actually seeming like hard work to Wilson.
That's part of Wilson's easy going appeal. Music making seems like a natural state for him - he's partway between J.J Cale and Ryan Adams in the way that he seems to effortlessly reel off quality tunes, but the end result has the smooth polish and timeless ambiance of early Crosby, Stills & Nash.
"Fanfare" is a much more immediate album than "Gentle Spirit". While "Gentle Spirit" had occasional moments like "Desert Raven" that grabbed me from the get go, the majority of it's running time was filled with fuzzy pastels that only came into focus after a concerted and repeated effort on the listener's behalf.
"Fanfare" on the other hand is a much more diverse record with hooks that reveal themselves much earlier on, without the corresponding lack of depth that this can often entail.
Appropriating Michelangelo's "The Creation of Adam" for the album sleeve seems to acknowledge two things. Firstly, that borrowing from the masters is something that Wilson is quite happy to own up to - no surprise there, a number of those masters - David Crosby, Graham Nash, Jackson Browne appear on "Fanfare" in supporting roles. And secondly, that with "Fanfare" Wilson is making a grand gesture.
The opening, title track confirms this - an orchestrated multi part suite that sounds like Alan Parsons decamped to the Canyon briefly. While Laurel Canyon prog may sound like a distinctly unappealing proposition - the results are intriguingly effective, despite how rubbish they may sound on paper.
Things gravitate more towards the sorts of sounds we've come to expect from Wilson's output soon after, but there's a greater emphasis on hooks, and on a number of the more upbeat tracks ("Love to Love" etc.) he sounds like he's having a much better time than we've heard him having on record before.
"Dear Friend" shows that he hasn't lost his touch for moody rockers, with Wilson's lovely Jerry Garcia influenced guitar work shining brightly, but more often than not the highlights are provided by the moments where Wilson pulls a rabbit from his hat - the funky clavinet of "Future Vision" (again I'm hearing Alan Parsons...), the EXTREMELY Stephen Stills like "Cecil Taylor" (where Wilson is ably abetted by Crosby and Nash) and the slightlydelic jazz /funk fusion of "Fazon" which has the good sense to sound like an extremely upbeat Steely Dan.
And while I'm talking about soundalikes, "Illumination" appropriates the chord sequence and vocal melody of Neil Young's "Dangerbird", retaining it's gritty Crazy Horse lope, and pulling in all the best bits from Pink Floyd's "Meddle" for window-dressing.
In lesser hands this sort of revisionist revivalism can sound tired, but Wilson has a gift for distilling the very best elements from his record collection (often with the help of the original protagonists) and turning them into something fresh with just the right amount of comfortable familiarity that makes it feel like revisiting old friends who always have new things to say.

Available on CD, vinyl, and digital.