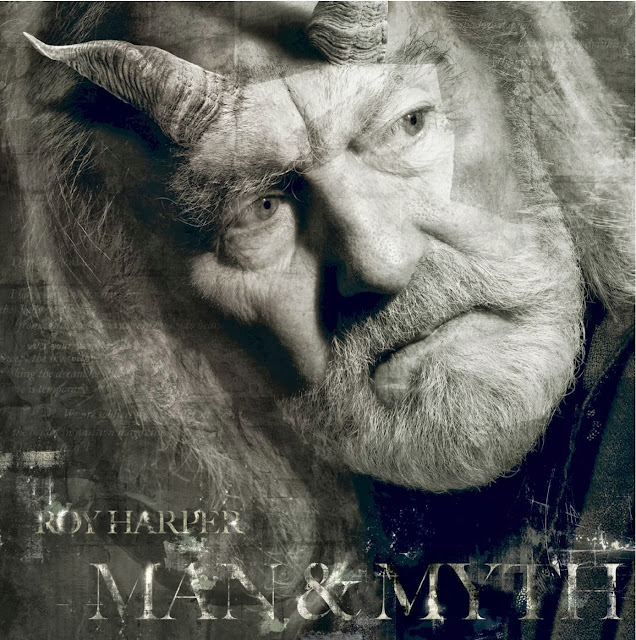 Roy Harper's last studio album, 2000's "The Green Man" seemed like the first step towards a major renaissance for an artist habitually underappreciated. His retirement announcement later in the decade was a major blow for those wanting to see that renaissance come to a head.
It was a very pleasant surprise then earlier in the year to stumble across the news that "Man & Myth" was done and dusted and ready for release, and happily I can report that it's a very satisfying follow up to "The Green Man", draped in veils of melancholy (thanks Status Quo!), and suffused with righteous anger.
So, nothing exactly new for a Harper release, but as a distillation of themes that he's pursued through a long career it's pretty priceless.
Jonathan Wilson sits in the producer's chair for four of the album's seven tracks, and while Harper is sure enough of his direction to not require a Rick Rubin style back to basics reinvention, he does allow Wilson to guide these songs in interesting directions that Harper hasn't explored before, notably on the delicate musings of "Time is Temporary" which unexpectedly benefits from a banjo refrain that is likely the closest Harper has veered towards Americana territory so far.
"Cloud Cuckooland" on the other hand proves that the art of protest has not been lost to him, and Harper's vitriolic musings on fame are perfectly accentuated up by guest guitarist Pete Townshend (joining an impressive roster of rock royalty who have performed on Harper albums), who's staccato stabs and searing leads are more visceral than anything we've heard from him for decades.
Best of all though is the closing one-two punch of "Heaven is Here" and "The Exile" - very much in the style of Harper's most famous work "Stormcock", it starts as a fairly straightforward account of "Jason & the Argonauts" from the point of view of one of Jason's crew, before it veers off in a more personal direction, with Harper's ornate acoustic guitar combining marvelously with swelling strings and insistent percussion that never impairs the narrative thrust of the over twenty minute suite.
Whether this proves to be a major step towards wider recognition (which there's hope for with the support of the excellent Bella Union label), or another isolated triumph remains to be seen, but it's certainly deserving of the sort of accolades heaped upon recent works by others of his generation.

"Man and Myth" is available here on CD, and here on vinyl.