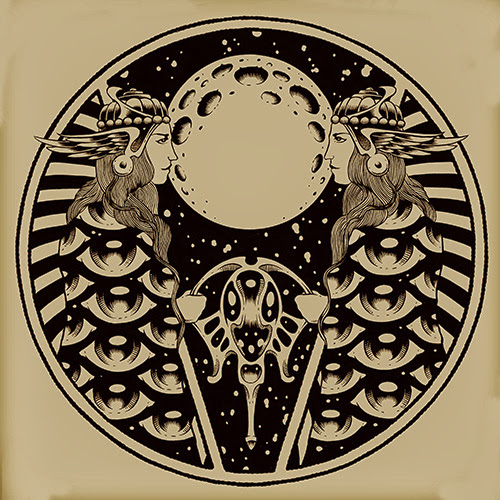 I'll be honest with you. I kind of gave up on the Asteroid #4 when they released their cosmic american album "Honeyspot". Don't get me wrong - it's a genre I'm fond of, and there are people out there that cite it as their favorite A4 album, but to me it just didn't seem like the best use of their abilities at the time, and more importantly it just didn't feel like an A4 album. It wasn't a conscious decision on my part to sever all ties with the band at this point, but whenever I thought of them from that point on I thought of "Honeyspot" rather than their numerous successes. The mind works in funny ways.
Anyway, all of that changed at the end of last year when I heard that they'd recorded "The Journey" with Kaleidoscope's Peter Daltrey (Daltrey interview here / album review here). I tracked down a copy and listened relentlessly - it's still one of my favorite albums of the last few years. Then came the "The Windmill of the Autumn Sky" E.P - a nice, low key E.P and perfect Sunday afternoon listening. By this point I had fully realigned myself to the Asteroid #4's mindset, so I greeted the arrival of a brand new self titled album earlier this month with much anticipation - the most I'd felt since the pre-release of "Honeyspot" in fact.
And "Asteroid #4" doesn't disappoint - while "The Journey" and "The Windmill of the Autumn Sky" weren't hugely psychedelic, showcasing a more mature, paisley tinged jangle than their earlier work, "The Asteroid #4" is a truly cosmic record, combining their new found maturity with the best elements of their early trippy psychedelia. It may well be the best album to bear their name to this point, and for a band who's been around since the mid nineties that's no mean feat.
Opener "The River" has more than a whiff of acoustic Led Zep about it with vocalist Scott Vitt handling the potentially intimidating Robert Plant comparisons with aplomb, while musically it sounds like Bron Yr-Aur is disappearing down the rabbit hole.
"Rukma Vimana" and "Revolution Prevail" are furious space-rockers, transmissions from a distant star that invoke Hawkwind's intergalactic chug with soaring, richly vocalized choruses keeping them out of the reach of Earth's gravity.
"The Windmill of the Autumn Sky" on the other hand is a most welcome revisitation from the earlier E.P, a much more grounded piece of melodic folk-rock with a hazy pastoral tinge that perfectly complements it's season.
Elsewhere there's vaguely krauty motorik mixed with airy, phased vocals (Ghosts of Dos Erres), deliberate, sitar laden mood fests (Mount Meru), acoustic melancholy (Ropeless Free Climber), and charming acoustic Floydisms ("Yuba").
An unpredictable, varied and 100% satisfying ride.
Oh and just in case you're wondering, I just listened to "Honeyspot" for the first time in ten years - not sounding half bad.