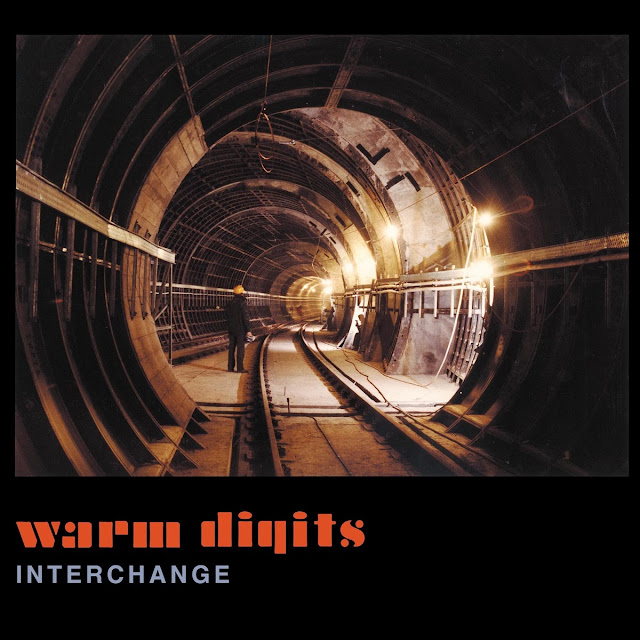 I'm not generally inclined to use more than a snippet from an artist's press release in a review, but this is an exception that I think benefits from being reprinted in full, rather than excerpted:

"Interchange" is Warm Digits' experimental film and album of music inspired by photography and illustrations drawn from the Tyne and Wear Archives, of the 1970s' biggest civil engineering project on Tyneside – the construction of Metro. Invited to investigate the archives to find inspiration to make some new music, Warm Digits found a selection photographs documenting the transitions between the crumbling, decommissioned British Rail stations of Tyneside and the new, futuristic Metro stations.
These 1970s photographs now carry a powerful aura of nostalgic hopefulness about publicly-funded civic development and connected communities. Visually, this has to do with the collision in the photographs of modernist architectural forms and advanced technology, with the dirt and grind of construction and the demolition and development of the older stations - what architecture critic Owen Hatherley calls the "outright weirdness" of the Metro system's designs, its "curious combination of antique and futuristic". In these photographs, tunnel shells bore unstoppably through the city's underbelly; boffinish, white-coated engineers are lifted by crane into half-finished shafts; modernist, abstract geometric shapes resolve into walkways and overpasses; while on the architects' plans, tiny huddles of theoretical passengers wait as shadows on platforms.
The songs on "Interchange", and the accompanying films which use the images as source material, take and hold on to some of the spirits conjured by these pictures: of hopefulness for a publicly-funded civic future, of the use of new technology for change, of the excitement and propulsion of travel.

Having not seen the accompanying film, I've only heard half of the story and am unable to comment on the relationship between the two, but the music these two produce seems like the perfect companion for the project, with lush vintage synthesizer tones and sprightly krautrock rhythms perfectly encompassing what I'm sure I would have thought the future was going to sound like if I had been knocking around the U.K in the early seventies.
The concept itself is VERY British, so it's surprising how successful and evocative this kosmische approach proves to be when you'd perhaps anticipate something a little more along the lines of the Ghost Box crowd to tick a few more boxes - but that's not where Warm Digits' interests lie, and they've done a thoroughly convincing job hijacking the strict motorik charms of Neu and appropriating them into something distinctively English - if this is the new Anglo-Saxon, I'll be having some of it thank you very much.
Add in some skronky guitar workouts and some dance floor friendly beats that show the influence of much more recent times and you've got one of the most diverse Krautrock albums of the year which only has the work of a Scottish duo masquerading as Germans (Kosmischer Läufer) that could threaten it's place as the best Krautrock release of the year.

Amazon UK have the best price for the CD/DVD package here.
The more lavish vinyl/ DVD package can be had direct from the label through the Bandcamp link below: