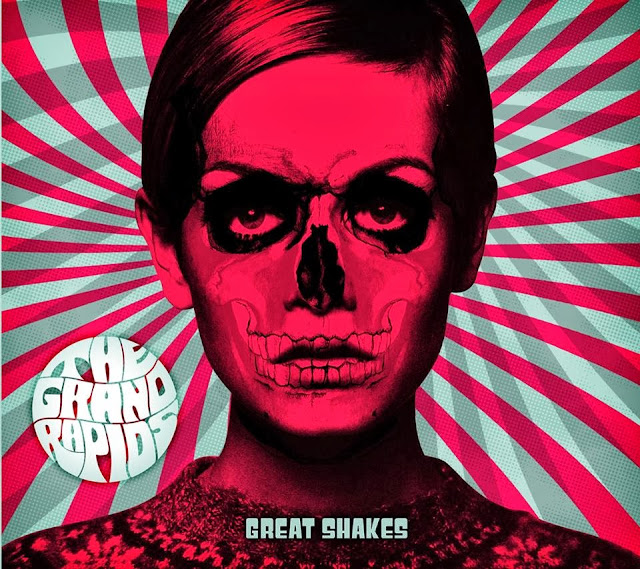 Australia must have more psychedelic bands per capita than any other country in the world at the moment (including countries like Italy and Greece where the psychedelic revival that began in the eighties never really stopped), which makes it even more disparaging that over here in neighbouring New Zealand we have pretty much none. But enough about my problems.
Melbourne four piece the Grand Rapids have just released their splendidly packaged debut "Great Shakes" through local psych imprint Psyche Ward and as introductions go, it's a pretty attention grabbing affair.
I hear a lot of bands who classify what they do as psychedelic rock, but few of them accentuate the rock implications of that sound as convincingly as these guys do. Recorded at Melbourne's iconic Sing Sing Studios, this is a HUGE sounding, visceral album with it's heaviness emphasized as much by the rhythm section as it is the droning wall of guitars.
Tracks like the opener "Dronemachine" and first single "Great Shakes" set the scene nicely - psychedelia which doesn't need to retrace it's lineage back any further than the early eighties, taking in elements that recall reverb merchants like the Black Rebel Motorcycle and the ever present tambourine of the Brian Jonestown Massacre. Most surprising though is a nascent post-punk influence, which on the evidence of Sasha L. Smith's impressive Robert Smith meets Mark Seymour vocals fits very snuggly indeed in this psychedelic context. Smith is particularly impressive in asserting himself in a mix where he could quite easily have become buried had his delivery not been so confident.
While there is a fairly heavy amount of fuzz and guitar drone throughout (one track "Fake Blood" consists of little more than layered feedback and a beautiful, keening guitar squall), guitarists Daniel Hallpike and Smith also know when a bit more definition and delicacy of touch is called for - the simple, spartan lead work that sees off "Headless Riders" for example is the sort of uplifting, melodic detail that lifts this head and shoulders above it's numerous peers.
And while it's distinctive sound is likely to be the first ingredient that grabs your attention, it's the subtle but barbed hooks that will keep you coming back. "Julia Now..." may be the best example of this, lacing the atmospheric paranoia of the Cure's seminal "Pornography" with the sort of nagging earworms they experimented with on it's follow up "The Head on the Door".
Marvelous.