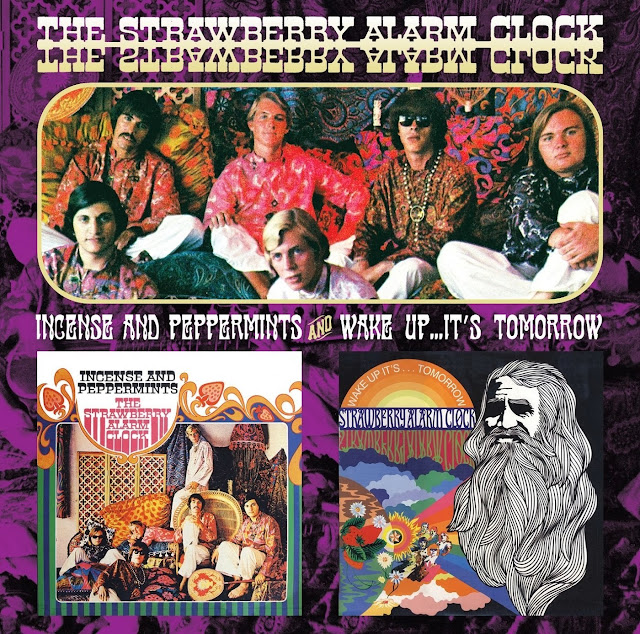 To the wider public, the Strawberry Alarm Clock have an unfair reputation as a bit of a naff one hit wonder - a bit of a novelty act - an impression further backed up for my generation when the hit of which we speak, "Incense & Peppermints" was featured extensively on the Austin Powers soundtrack.
Those with less of a hive mentality who have taken the effort to investigate what lies beyond "Incense & Peppermints" have been surprised to discover a much more adventurous and diverse catalogue that may have failed to yield a follow up hit, but had plenty more going for it.
This new reissue from Esoteric couples their first two albums (which just so happen to be their best two) with sundry b-sides and bonus tracks that should go a long way towards dispelling the uninformed opinions that many have of this unfairly neglected act.
The extensive liner notes go into excruciating detail as to the convoluted back story of the comings and goings of band members (and a number of members of other bands in the SAC's orbit who appeared on the albums but weren't actual members) so we'll give that a miss here and concentrate on the music. The results in this case are much more important, and much more interesting than the difficult circumstances that created them.
The debut "Incense & Peppermints" shows signs of under-preparation lyrically (sample titles "Unwind with the Clock", "Pass Time With the SAC"), but even these seemingly off the cuff pieces are elaborately tailored musical numbers with ornate five part harmonies and lashings of searing acid fuzz guitar that bely their fluffy reputation. Opener "The World's on Fire" is perhaps the biggest surprise - a lengthy eastern fueled saga that wouldn't sound out of place on the Ultimate Spinach's "Behold and See", hastily rewritten in the studio from an earlier song when a departing band member took the rights to that song with him. This alone ought to silence any lingering doubters.
Follow-up "Wake Up...It's Tomorrow" is if anything, even better. A much darker edge is present on "Curse of the Witches" with tumbling xylophones which sound like the soundtrack to a psychedelic jazz-fueled descent into madness, "Nightmare of Percussion" and the three part "Black Butter" suite.
There's also plenty of lovely psych-pop to balance it out with "Tomorrow" and "Pretty Song From Psych-Out" (which the band had high hopes for as a potential hit) making the most impression on this side - impressive harmonies, great pop smarts and often trippy as all hell.
It's never too late for a re-education - enrol here.