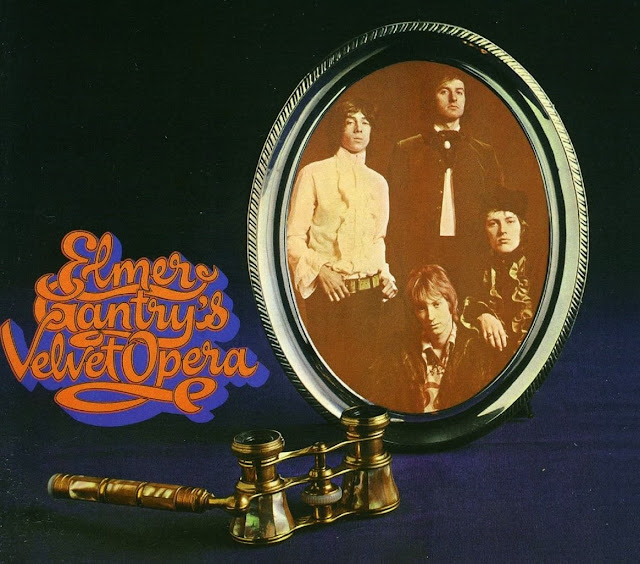 As an avid investigator of sixties audio relics I've become used to encountering groups that should have been much more successful than they actually were. That's exactly what keeps collectors like myself  searching through dusty old crates of records when we should be doing far more productive things. Of all the bands I've been exposed to over the years, one of the first genuine rarities that I heard is perhaps the most bafflingly unsuccessful of the lot of them.
On the face of it Elmer Gantry's Velvet Opera appeared to have everything going for them.
In Dave "Elmer Gantry" Terry they had an authoritative vocalist and theatrical frontman who could handle the genre straddling nature of the Velvet Opera's material with ease. Guitarist Colin Forster was almost as versatile - enough for lauded psychedelicists Tintern Abbey to steal him shortly after. The rhythm section of John Ford and Richard Hudson would eventually find success in the Strawbs - as well as pursuing their own quality Beatlesques powerpop as Hudson Ford.
In "Flames" and "Mary Jane" they had quality singles - the former a rowdy piece of mod-soul that fledgling peers Led Zeppelin thought was tidy enough to cover in their very first live performance in 1968, and the latter a quality piece of whimsical psych-pop with hooks that belonged on the radio. And both songs did get a substantial amount of airplay in the UK, which coupled with their formidable and I'm told extremely popular live act should have meant that their self titled debut would sell the bucket loads that it deserved to sell. Except of course, we know that it didn't.
Far from the expected smattering of singles surrounded by covers and filler that one often encounters from this era, "Elmer Gantry's Velvet Opera" is a rather splendid album that masters a number of styles and preempts a few others that were about to surface. Where this approach often sinks a number of similar albums, there's never a sense that the Velvets (if I may be so familiar) are grasping at straws to formulate a sound - everything they try here is integrated seamlessly into their distinctive sound.
So along with the singles mentioned above, within the confines of this new expanded reissue from Cherry Red offshoot Grapefruit, you'll encounter the following delights; "Mother Writes" (Who-ish mod rock which showcases Ford's aggressive bass attack - second only to Entwistle at this point), "Walter Sly Meets Bill Bailey" (quality instrumental proto-prog which flits between the vaguely robotic and the distinctly tudor), "Air" (sitar led raga pop with a noticeably Harrison-esque tinge), "Lookin' For A Happy Life" (Idle Race style whimsical psych pop), "What's the Point of Leaving" (genuinely forward thinking and extremely quirky bedroom pop that sounds like the sort of thing McCartney was tinkering with on "McCartney II" - nothing else from 1968 sounds like this), "Dream Starts" (alarmingly disorientating psychedelia) and perhaps best of all "Reactions of a Young Man"(lovely pastoral proto-prog with mellotron to the fore, easily matching anything the Moody Blues or Barclay James Harvest were releasing at the time.)
The rest is great too - this edition contains eleven bonus tracks - demos, b-sides, contemporary singles and "Talk of the Devil" - an Eric Woolfson (of the Alan Parsons Project) penned theme tune for a 1967 short horror film which I'm about to scour the net and try and find.
Good job Cherry Red / Grapefruit - very decent of you to make this available again. Hopefully someone will buy it this time.