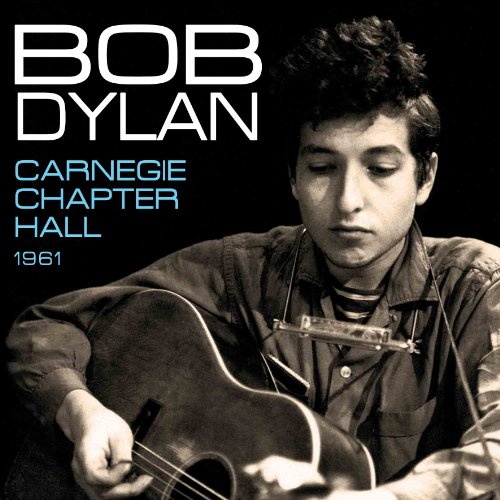 Another excellent new release in this series of legal, but not officially endorsed releases by major artists, this intriguing archival release presents all known surviving songs from Dylan's first non coffeehouse concert in New York.
Recorded days after Dylan signed his contract with CBS, this concert was organized by Izzy Young at the Carnegie Chapter Hall, a rehearsal space upstairs at the famous concert hall which seated around 100 people. With only 53 paying punters and a few friends of the promoters in attendance, Young lost money on this particular gig but can gain some satisfaction from being involved in such an historic performance.
Around a third of the performance was either not recorded in the first place, or has since been lost, but the producer's of this CD have done an excellent job of sourcing all known surviving material from three different sources and mixing it seamlessly into a coherent and entertaining snapshot of a young and keen to please Dylan.
Sound quality is very good, with the only issues being some not particularly distracting audio dropout during Pretty Peggy-O, and some occasional vocal issues caused by Dylan straying off mike.
Dylan is full of nervous energy, chatting excitedly between songs and constantly fidgeting with his guitar, but once he starts playing a song he's focused, and his easygoing, almost Chaplinesque shtick is instantly swept aside. 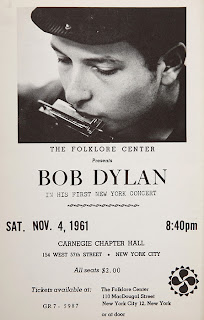 We get committed readings of a number of tunes that would end up on his first album, but the real reason to buy this is for the slew of interesting covers. You've likely heard Pretty Peggy-O elsewhere as it stayed in his live repertoire well into 1963. More interesting are his readings of Leadbelly's ever popular In The Pines, which he admits " he don't know so good " yet, and Woody Guthrie's 1913 Massacre, from which he borrowed Song To Woody's melody.
A Long Time a Growin' is another new number in Dylan's repertoire, having just learnt it from Liam Clancy, and is one of the most delicate performances on here, with Dylan showing an unexpected subtlety and sweetness in his vocal phrasing.
Fixin' To Die and Gospel Plow are raw and spirited - both very similar to the performances that would end up on the first album.
Backwater Blues is present in it's only known surviving Dylan performance, and despite a few dubious moments on the guitar early on is another gritty Dylan blues vocal.
It's impressive that even at this very early stage, the Dylan originals here stand up admirably to their time - tested company.  Man On The Street and Talking Bear Mountain Picnic Massacre Blues are confident and insightful pieces of observational songwriting which should have seen release before the Bootleg Series kicked off in 1991.
Overall then, a surprisingly fully realized and versatile performance which is worth acquiring for far more than historical significance.