This quasi-legal European CD release will be passed up by a number of people because it's not an officially sanctioned release, and because it was recorded smack, bang in the middle of Neil's most maligned run of albums.
To address the first of these issues ; forget your perception of bootlegs being recorded on a dictaphone taped to the bottom of one of the audience member's seats - this is a high quality recording made and professionally mixed by KLOS FM and easily competes with any official release of the era in terms of sound quality.
As for the music itself, this show may have been recorded between the much derided Landing on Water and Life albums, but the performances of the songs from this era presented here go a long way to proving that the fault didn't lay with the songwriting, but with the studio production. Live, these songs are given a new lease of life and there's an obvious enthusiasm that's not immediately apparent on the studio recordings. I'll admit to being a closet Landing on Water fan, so I may be the only person around who's actually disappointed that there's only one cut from that album here. Violent Side is a bit of a lost classic in my opinion, and stripped of it's shiny studio sheen and child chorus back vocals it's given the chance to shine even more. As for the Life material, hearing these versions and comparing them to the official versions released the following year, it's almost like Neil was sick of this material by the time he made it to a studio to record it - these early road tested versions come up trumps every time. 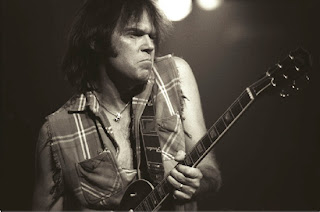 We also get a couple of tracks from Trans, which seems to have been given a much needed reappraisal lately, and rightly so - Sample and Hold and Computer Age are both classics and the added punch of the Horse on these versions only reinforces this fact.
There's plenty here for the more casual fan too ; Cortez the Killer, Hurricane, Powderfinger and  Down By The River are all given passionate readings with lashings of raw Neil guitar. There's also a few nice acoustic moments with After The Gold Rush and The Needle and the Damage Done, and it's always nice to hear Neil revisit his Buffalo Springfield roots with Mr. Soul.
Required listening for Neil Young fans, and an essential piece which makes a whole lot more sense out of the puzzle of his eighties recordings.

You can sample the second half of the concert from Computer Age on here :