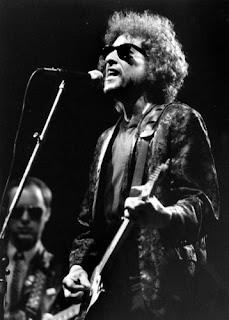 Saved ( 1980 )
Dylan's crusade / tirade continues with the second of his so-called Christian trilogy. The least popular of the three ( which is saying something ), this is definitely the most in your face lyrically, but musically is full of interesting stuff and one of Dylan's most underrated albums. The production is fairly nondescript which makes this a bit of a challenge to get into, but it's worth the effort. What Can I Do For You is a winner, with it's committed vocal, and some of Dylan's best harmonica work. Pressing On has developed a deserved reputation lately, thanks to it's faithful John Doe cover on I'm Not There, and Dylan realised In The Garden's potential enough to keep it in his live set for most of the eighties. With a slightly better production job and less bible-thumping lyrics, this would stand up to favorable comparison with Slow Train Coming. ( 6/10 ) BUY IT HERE

Shot of Love ( 1981 )
Dylan chills out a bit with this, and presents his faith in a less provocative manner which makes it a far easier secular listen. The production and band performances are both a little shambolic and loose, but for the majority of this material this approach works. In Lenny Bruce, and Every Grain of Sand  it contains Dylan's first two masterpieces of the decade, while The Groom's Still Waiting At The Altar was hailed as a return to his mid sixties Highway 61 sound. Dead Man, Dead Man sounds like a blueprint for I & I from Infidels and In The Summertime has the feel of Van Morrison's contemporaneous material.  Unfortunately at this point Dylan began to lose a little confidence in some of his better material and two more ambitious and superior tracks ( Angelina and Caribbean Wind ) were left off in favor of some more pedestrian material. These weaker tracks bog things down a little, but generally this is a pretty consistent albeit unspectacular listen.   ( 6/10 ) BUY IT HERE

Infidels ( 1983 )
Producer Mark Knopfler brought in the big guns for this one. Reggae legends Sly & Robbie lay down the bottom end, Rolling Stone Mick Taylor joins Knopfler on guitars, and Dire Strait's Alan Clark provides keyboards. Unsurprisingly this is Dylan's smoothest sounding album since Slow Train Coming, but it's still a little on the inconsistent side, and suffers from the same track selection problems as Shot of Love. Jokerman is fabulous and shows Dylan's grasp of language at it's very peak. I & I continues in a similar vein and is moody and mysterious. The romantic tracks Sweetheart Like You and Don't Fall Apart On Me Tonight are pleasant but slight. The more politically oriented material, particularly Neighborhood Bully and Union Sundown come across in a less sympathetic light unfortunately and had Blind Willie McTell and Foot of Pride found their way on here instead of these tracks this would be a contender for Dylan's best album of the decade, as it is it's still a step in the right direction. ( 7/10 ) BUY IT HERE

Real Live ( 1984 )
Dylan's first tour since 1981 is captured here on the Infidels tour, but doesn't do a particularly good job of showing the tour at it's best. It's not as bad as it's reputation would have you expect, but it's not the lost gem you were necessarily hoping for either. There's a more adventurous selection of tracks than we've come to expect from Dylan's previous official live albums, which works in it's favor. It's also nice to hear a couple of the better Infidels tracks in a grittier setting. Dylan's habit of reinterpreting his catalogue continues here with mixed results, the highlights being a rockier version of Masters of War and Tangled Up In Blue given a major lyrical overhaul. Elsewhere this is a collection of semi committed performances which is good enough to retain my attention when it's playing, but not good enough to make me go to the effort of putting it on all that often.
( 5/10 ) BUY IT HERE

Empire Burlesque ( 1985 )
Dylan's mid eighties slump begins here with an album not even a mother could love. The garish cover tells you exactly what this is going to sound like, with horrible Arthur Baker production which must have felt dated a week after release attempting to disguise an uninspired collection of duds as contemporary pop. In all fairness the eighties wasn't a happy time for many rock legends - Neil Young and Joni Mitchell are two artists that come to mind who also found it hard to find their place in the eighties aesthetic. Several of the songs on here have since been given some semblance of respectability with more sympathetic live arrangements throughout the nineties, but here they verge on unlistenable. Closing track Dark Eyes on the other hand is a solo acoustic gem, which would stand out in far more esteemed company. ( 2/10 ) YOU CAN BUY IT HERE, BUT I WOULDN'T RECOMMEND IT

Knocked Out Loaded ( 1986 )
Where Empire Burlesque was at least filled with Dylan songs, his muse seems to have deserted him completely here, resulting in a set heavy on co-writes and covers. The production, while still dated, is marginally better which makes this an easier album to listen to, but still a hard one to enjoy. His cover of Kris Kristofferson's They Killed Him may be the worst track he released in the eighties, but Brownsville Girl does it's best to even up the odds and with more appropriate production would be held in very high regard. The rest of the material is generally bland and inoffensive, but to me Dylan should never be background music.
( 3/10 ) BUY IT HERE

Down in the Groove ( 1988 )
The bland corporate rock continues here, with a bunch of superstar guests failing to light a fire under the floundering Dylan. The dirge-like Death is Not The End is held in reasonably high regard but is a leftover from Infidels. Silvio is a moderately engaging rock number which works a lot better live, while the acoustic cover of the Louvin Brothers classic Rank Strangers comes across particularly nicely, although one suspects it wouldn't fare so well on a stronger album. Much like Knocked Out Loaded, this is a decidedly average listen that's not offensively bad, but offers little in the way of reward for listeners. ( 3/10 ) BUY IT HERE

The Traveling Wilburrys Vol. 1 ( 1988 )
Whether it was being surrounded by quality musicians or just the chance to have fun with little in the way of expectations, Dylan seriously raised his game here. Sharing the writing duties would certainly have helped ease the pressure for Dylan, and his tracks on here are all excellent. Tweeter and the Monkeyman is a fantastic Springsteen pastiche full of drama and intrigue which would have seemed totally out of place on any of his own albums, but fits perfectly here. Dirty World is more fun than Dylan sounds like he's had for years, and Congratulations coasts along nicely. Lots of fun and a bit of an unexpected reward for those who'd been loyally buying up his previous albums as they'd been released. ( 8/10 ) BUY IT HERE

Dylan & The Dead ( 1989 )
It sounds good on paper, but there's a reason this took two years to release. Recorded in 1987 this has the Grateful Dead as a glorified back up band - a prospect that they don't seem to know how to handle. They're constantly wandering off into ponderous noodling, with Garcia's usually excellent spidery lead breaks being particularly ill fitting. Dylan's in rough form too and doesn't seem to have the confidence to take charge on what should have been a very interesting combination. The intriguing track list isn't given a chance to shine and apart from few moments of inspiration in Slow Train this is turgid and disappointing stuff. ( 3/10 ) BUY IT HERE

Refreshed after his first stint in the Traveling Wilburry's, Dylan here comes up with his most confident and assured set of songs of the decade, and an album that compares favorably with his very best work. Most of the Time and What Good Am I? show a lyrical depth that we haven't seen from Dylan for a number of years. Daniel Lanois' production gives this an ambience which sounded fresh at the time and sounds timeless now, illustrated best on the fabulously spooky Man In The Long Black Coat, while Everything is Broken and Political World are brimful of pop smarts.  Dylan's best since Desire. ( 10/10 ) BUY IT HERE