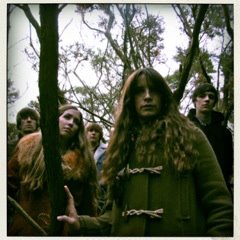 There seems to be something in the water in Liverpool that only affects Skellys.
First we had James and Ian Skelly's thoroughly excellent modern merseybeat outfit The Coral.
Next came the Coral backed Poet and The Dreamer, a diverse and uncategorisable album from the fabulous Neville Skelly ( James and Ian's cousin ).
Now the newest kids on the block are The Sundowners, featuring Alfie and Fiona Skelly, younger siblings of James and Ian.
Don't expect them to sound like big brother(s) though, they largely eschew the Coral's Beatles and La's inspired merseybeat in favor of a breezy folk rock inspired by the likes of Crosby Stills and Nash, The Byrds , Tom Petty and notably Fleetwood Mac.
The full lineup is Niamh Rowe (Vocals/Rhythm guitar), Alfie Skelly (Lead Guitar), Fiona Skelly (Vocals/Rhythm Guitar), Tim Cunnihgham (Bass Guitar) and Jim Sharrack (Drums). 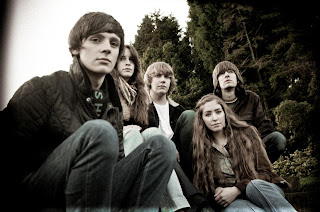 They're currently unsigned and taking their time working on material. They have three great demo tracks available to listen to below. They've already supported Other Lives and Cat's Eyes and the word is that their live show is pretty fabulous. If their demo tracks are anything to go by, that's not too much of a stretch of the imagination.
Join their facebook page here to keep an eye on their progress, they're definitely a band to keep an eye on for the future.

Email ThisBlogThis!Share to TwitterShare to FacebookShare to Pinterest
Labels: The Sundowners