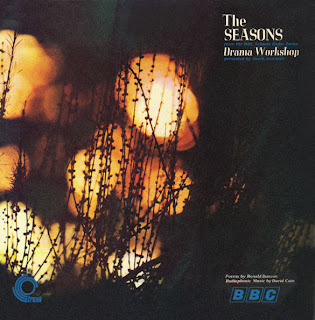 The ever reliable Trunk Records have another winner coming out for us on March 13th.

The much admired and highly sought after Seasons LP by David Cain and Ronald Duncan has developed a reputation as a major influence on the Hauntology scene and will finally be getting it's first official CD release.

Jonny Trunk says : "This album is a “cult” classic in many ways. Always a little devil to find, I first posted it up on the Recommendations pages in 2003. This was one of three copies I’d found with Martin Green at a Tonbridge Wells record fayre in the late 1990s. Several people in my small circle of peculiar musical chums also came across it, and by the mid naughties it was coming across as a major influence on retro futurism and the new fangled scene they named hauntology. This comes as no surprise as the album has several layers and levels to it; it is weird, spooky. unsettling, very British, has an unusual whiff of childhood to some, it comes scattered with pregnant language and is full of unexpected metaphors, pagan oddness, folk cadences and insane noises. Does it get any better? Considering this was an LP made for children’s education and improvised dance, I think not."


YOU CAN PRE-ORDER IT HERE ON CD