The Soundcarriers are a band much talked about in the right circles, and with good reason.
Often compared to space pop faves Broadcast, they present a more accessible, but no less adventurous melange of sounds than Broadcast, and manage to pull a stack of memorable tunes out of a diverse and often challenging set of influences.
Apart from an obvious shared love for sixties futurism, the most obvious reason for the Broadcast comparisons would seem to be Leonore Wheatley's tremendous voice, which can sound like Trish Keenan one second and Jacqui McShee the next. They're also much less willfully obscure than Broadcast, and know exactly where and when to break out a killer chorus. 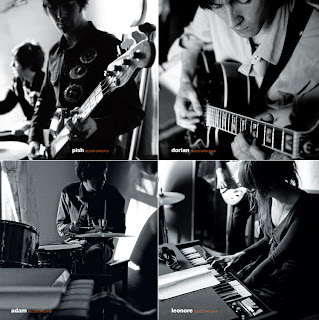 Sixties pop, library music, krautrock, soundtracks, psychedelia and jazz all feature prominently and it seems like they're coming from so many different directions that this should really be a hopelessly confused jumble, but they effortlessly coalesce everything into a very distinctive and individualist whole.
Their first album, Harmonium was a great thing, an impressively confident, fully formed debut. The follow up, Celeste may be even better.  Recorded on analogue with natural reverb, this comes across like a lost classic from a time when artists were given the freedom to be more adventurous and ambitious than is often the case now.
The propulsive Last Broadcast is certainly a lively way to open proceedings with Paul Isherwood's aggressive bass attack sounding like a cross between Holger Czukay and early Roger Waters.  The rhythm section gel impressively throughout and are often given a prominent led role, which is refreshing.  Hazy harmonized vocals, and moody flute passages are also used extensively and along with the frequently psychedelic, textural guitar breaks help evoke an era that's often imitated, but rarely with such authenticity in this digital age.
Great stuff, they're working on album number three at the moment and expectations are high. Can't Wait !