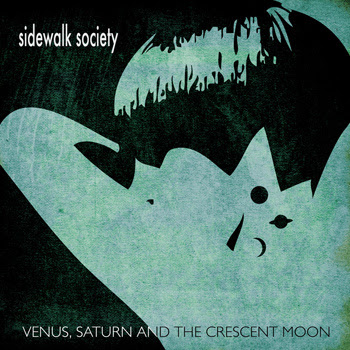 The Sidewalk Society first came to my attention as a result of their four track covers 7" ( which I discovered after it'd sold out - blast! ) released by the excellent Fruits De Mer label.
This included covers of the Kinks, the Rolling Stones, the Small Faces, and most interestingly the Remo Four's excellent "In The First Place". These selections made me very curious to hear what their originals sounded like, and with the arrival of their first full length "Venus, Saturn and the Crescent Moon" I've been given the chance to hear how they stack up compared to their influences.
The band are obvious anglophiles, and who can blame them - the U.K sixties scene of the mid to late sixties spawned a bunch of great stuff. The surprise here is that the band don't sound a whole lot like any of the artists they've covered on the e.p, and have a much more diverse and varied sound than I expected.
The Who seem to have made a major impression, with drummer Jerry Buszek showing an impressive amount of energy and dexterity behind the kit which Keith would be proud to call his own. "If Only" would fit in nicely on "The Who Sell Out", while the guitar explorations at the end of the rather excellent "Abbey Chatsworth" sound like the result of a youth spent obsessing over "Live at Leeds" - a noble undertaking.
Elsewhere though, there's evidence of an awareness of seventies power pop that all the jangling twelve strings in the world can't hide on "Silent Echo", while "In Refrain" updates Elvis Costello's vocal mannerisms, and "Nice Boys" is a neat power popper with keyboard work that'll make you pine for Steve Nieve's days in the Attractions.
A nice diverse set with a touch of period flavour for those who enjoy that sort of thing, but with plenty of contemporary punch too.

Available in all three formats via this bandcamp link.