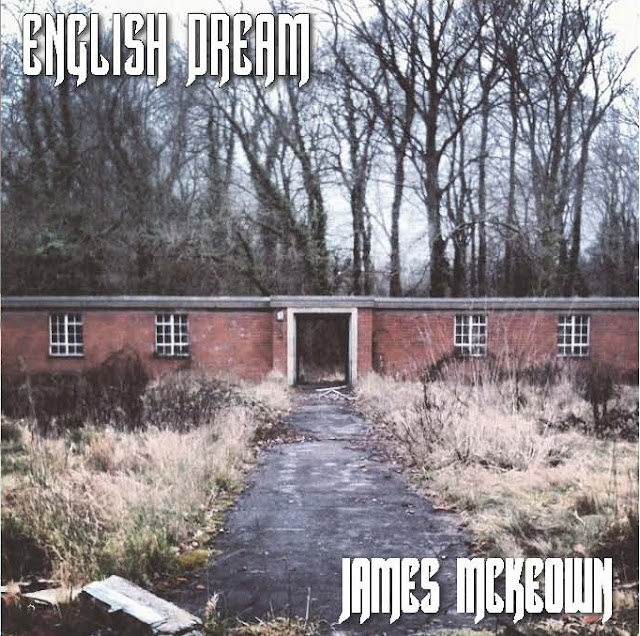 A few months back I reviewed the debut from an interesting and basically uncategorisable Bristol outfit who go by the name of Hi-Fiction Science ( see review here ).
Their guitarist, James McKeown is a pretty prolific songwriter with enough excess material for a sideline of solo albums. "English Dream " is his second solo album, and I'll be honest - I was apprehensive when asked to review it. After all, we've all learnt from experience that when a guitarist branches out with a solo album you can expect one of three things ; technically explosive exercises in fretboard dynamics with zero personality, an album that sounds exactly like their dayjob but with superstar guest vocals, or worst of all, the introspective singer songwriter effort that demonstrates why said guitarist isn't allowed to sing in their main band.
Well, it turns out that there's a fourth category that these solo albums can fall into that's a much rarer phenomenon ; the folky singer songwriter effort which transcends the work of the band that they're primarily known for.
As much as I enjoyed the Hi Fiction Science album, "English Dream" is on a whole other level, with songs that feel totally lived in with sparse, textured production that leaves plenty of room for these superior compositions to breathe.
It's predominantly acoustic, with subtle and timeless sounding keyboard and electric guitar accompaniment making this sound like some lost gem from the early seventies, a parallel acknowledged by the Keef inspired cover art.
I'm most often reminded of the delicate little acoustic numbers occasionally scattered throughout Pink Floyd's pre-"Dark Side of the Moon" catalogue ("Cirrus Minor", "If", and especially the massively underrated "Wot's Uh The Deal?"), although I suspect that this is more an influence than a conscious homage. It doesn't hurt that McKeown's vocals often recall both David Gilmour and Roger Waters, especially when doubletracked closely, or stretching for a note that should be out of his reach, but isn't quite. McKeown's guitar work too is reminiscent of Gilmour - although more of his early textural guitar work, think "Echoes" rather than "Comfortably Numb".
But what of McKeown's songs? They're not immediate, but after several plays they reveal themselves to be marvelous little gems that feel like old friends that you'd be happy to spend the rest of your days with.
"See The Skies", "English Dream", "Ghost In Your Life" and "Dead Maids" are fully developed tracks with effecting vocals and resonant hooks, while "summerrainsummersky" shows that McKeown has spent some time poring over Bert Jansch records. Most charming of all perhaps is "Life Aboard The International Space Station", an unusually nostalgic and pastoral instrumental piece that perfectly evokes the polyester of an idealized future, through the imagination of brown cardiganed mid seventies Britain.
An album that deserves to be heard by a lot of people - make sure you're one of them.

Digital release on October 15. Preorder or listen to sample tracks through the widget below.