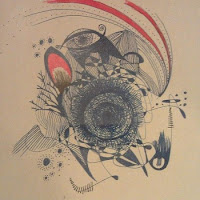 This week's Desert Island Discs selections have been made by Chris Oliver also known as the psychedelic one-man-band spectacular "The Solar System". Check out the latest Solar System album "Lysergic Summer" here : http://thesolarsystem.bandcamp.com/releases


Says Chris "The concept of Desert Island Discs is quite a challenge. I have a huge music collection and I'm always searching for new sounds so to choose just ten albums was a bit tough but after much thought, Here are ten albums I know I can't live without."

1. John Frusciante-Niandra Lades And Usually Just A T-shirt.
This album blew my mind and opened doors for me to what music could be and the feelings it can bring to a human. The album is just John with his guitars on his 4-track with very little extra instrumentation but what John brings is one of the ultimate psychedelic albums in my opinion. As I write, I'm having a hard time coming up with the words to describe all the feelings this album gives me. If you are open minded enough, I highly suggest taking the trip!

2. Syd Barrett-The Madcap Laughs.
Just like the Frusciante album, This record blew my mind. This album is like walking into Syd's fragile mind. He is beyond open and honest with the listener here. You are sucked into his world. It's also an album i've listened to thousands of times and with each listen I discover something new with each listen.

3. The Beatles-Revolver.
Pretty tough to pick just one album by the fab four but I seem to always go back to Revolver. The beginning of the Beatles exploring and breaking the boundaries of rock music at the time. Tomorrow Never Knows is one of the most tripped out songs ever recorded, Still till this very day. The album also showcases George Harrison's amazing ability as a songwriter. He is truly finding his voice on this album with great songs such as "Taxman" and "Love You Too".

4.Beck-Mellow Gold.
As a kid growing up in the 90's, Hearing Loser for the first time was a trip. I've never heard music like that at the time and after the first listen to Loser I had to hear the rest of the album. This album for me I can honestly say is one of the biggest influences on me as a musician as well as Revolver by the Beatles. Every song on Mellow Gold finds Beck experimenting with every musical genre you can imagine. Taking Folk, Hip Hop, Disco, Drone, Psychedelic, Rock and so much more and throwing it all on top of each other. It still blows my mind when I revisit the album and if anyone has listened to a Solar System album you will see the influence this album has had on me as a musician.

5.Olivia Tremor Control-  Dusk At Cubist Castle.
When I discovered this band and The Elephant 6 Recording Company it was like meeting a long lost friend.  It gave me complete comfort. Dusk to me is the perfectpsychedelic album. The production blows my mind and when I found out most of it was recorded on 4-track cassette and all the crazy tape splices etc etc it tripped me out as I too was recording on a 4-track. Olivia opened my minds to what was possible with limited equipment. Will Hart is probably the most psychedelic songwriter ever, If you didn't know any  better you would for sure think this  album comes straight out of 1967.Sadly Bill Doss recently has passed away and they were in the midst of making a new album. Such a shame to have lost one of the nicest musicians ever and someone who I was lucky to have met and have a few really great conversations with.

6. Neutral Milk Hotel- On Avery Island.
People will probably flip out seeing this album over the classic In The Aeroplane Over The Sea, an album I love dearly but On Avery Island just does it for me. The emotions are at an all time high on this one and again the production on this album amazes me. My ears are attracted to the more dirty, low-fi sounds and this album is just that. Jeff Mangum is one of the best songwriters ever. After hearing the first song "Song Against Sex" you will agree with that statement. Jeff has recently started playing shows again and I hope one day he will give us all new music!

7.The Apples In Stereo- New Magnetic Wonder.
It was very hard to pick just one Apples album as I love them all but I had to go with this one. Robert Schneider is easily my favorite producer ever. I love his production style. He has produced pretty much all the classic E6 releases and to me his production style is a mixture of Joe Boyd, Jeff Lynne, Brian Wilson and Shel Talmy. Pretty much all of my favorite producers as well so to be able to put them all together is just amazing. Robert is also one of the best songwriters out there. If songs like "Open Eyes" "Same Old Drag" and "Beautiful Machine Parts 1-4" don't blow you away, I don't know what will!

8. Sean Lennon- Into The Sun.
This album just like Mellow Gold by Beck manages to take every genre possible and put them all together.  I think this is Sean's Masterpiece and has yet to top it. Sadly most wont agree or have even heard this album. I always go back to this album and it never ceases to amaze and inspire me.

9. King Crimson- In The Court Of The Crimson King.
This album introduced me to Progressive rock. Finding this album in my dad's record collection and seeing that album cover tripped me out and I had to hear what that album cover sounded like. The first song "21st Century Schizoid Man" did just that! Robert Fripp is a genius and has gone on to produce many other great Crimson albums and it was indeed hard to pick just one but this is the winner. Moonchild still gives me chills to this day. A true masterpiece!

10.Black Sabbath- Paranoid.
This album is one of the best rock albums ever, Pure and Simple. I think the band itself doesn't get enough
credit for how great of musicians they are. Geezer Butler and Bill Ward are easily one of the best rock  rhythm sections. Listen to any song off this album and tell me otherwise. This album contains elements of progressive rock, psychedelic and of course heavy metal and what was to become known as doom metal. Every song on it is a classic and should be in everyone's collection.

Got your own Desert Island Discs selections that you'd like to share? Send them through to nford150@gmail.com