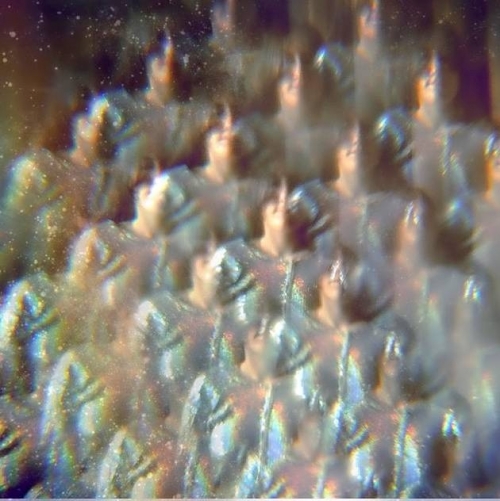 A quick look at the acts that Stealing Sheep have supported (Field Music, St Vincent, the difficult to type tUnE-yArDS) gives you a better idea of what this excellent new Liverpool three piece sound like than the "psychedelic folk" or "English Warpaint" tags they've been branded with so far.
There are certainly elements of psychedelia and folk rock present in their sound, but they have a wide ranging set of influences and backgrounds that makes this a far more diverse genre-hopping set than Warpaint have managed so far.
Drummer Lucy Mercer has a background that embraces both gypsy folk and marching bands, guitarist Emily Lansley has been lurking in the Liverpool psychedelic scene for some time, and keyboardist Becky Hawley cites electronica and Bjork as major influences.
While this may sound like the basis for a pretty abstract, if not entirely unlistenable album, their unerring ear for a fantastic pop tune makes this a far less challenging affair than one would expect. Those heavenly vocal harmonies certainly don't do any harm either.
I'm often reminded of Broadcast and the more accessible Pram material, although neither of these bands ( to my knowledge ) were able, or inclined, to combine quirky little girl pop with sinewy  Fairport Convention guitars to come up with a track as appealing as "Shut Eye".
"Genevieve" and "Rearrange" are almost as good on the hooks front, while "Tangled Up in Stars" suggests that some unholy union between Eurovision and the Wicker Man may not be such a bad thing.
"Bear Tracks" is an ambitious multipart closer that seems to be getting a bum rap in some quarters but to me is the clincher to a fine album that perfectly balances the tuneful and the slightly challenging.

Available here on CD and here on Vinyl.