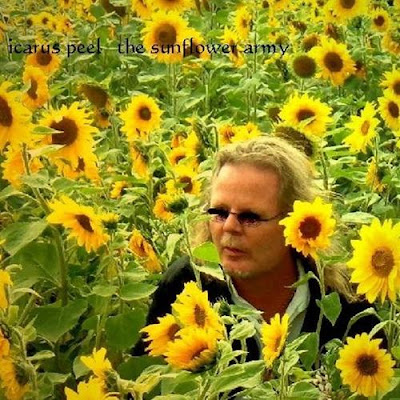 I've always held a fondness for English musical eccentrics. While the American equivalents ( Zappa etc. ) have always been a little zany for my tastes, the English have always had a quiet dignity to their weirdness that appeals to me greatly.
This is where Icarus Peel comes in. Following in the footsteps of the likes of Syd Barrett and Robert Wyatt, Mr Peel has, along with the much more widely heralded Bevis Frond, quietly cornered the market in updated English psychedelia.
Weaving a diverse set of influences together into a cohesive and contemporary whole, "The Sunflower Army" is his second release. His debut "Tea at my Gaffe", was an impressive set of psych pop, but the follow up is a more ambitious affair, incorporating elements of prog rock and the Canterbury scene into his whimsical psych pop approach. Prog with choruses, if you like.
Like the first album, it's a home recorded work with Mr Peel handling all instruments by himself with some lovely backing vocals from Crystal Jacqueline. Peel's vocals have a touch of early eighties Roger Waters about them, which suit the often epic arrangements on tracks like "Moon Madness".
He also trades in a nice line of pastoral acoustic numbers which have more than a whiff of something that you'd have heard on the Harvest roster in the early seventies. Nice stuff, and certainly something for fans of the late sixties / early seventies underground U.K era to check out with much speed.