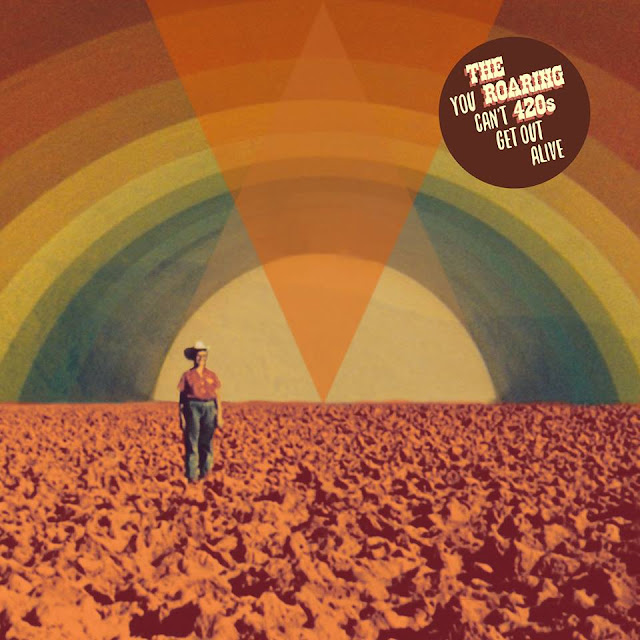 From the newly formed It's a Gas Records, "You Can't Get Out Alive" is the latest from Dresden, Germany's The Roaring 420s. Like all their previous releases, this one provides evidence that by some cosmic mishap the whole band ended up displaced in time and place. As most press regarding this band does, my review will confirm it too: The Roaring 420s sound much more like a California garage band; they embody the hazy vibes of the late 60s - with some admitted updates to the sound and recordings, of course - to a tee, whether in lyrical content or their unending enthusiasm for weirdness and experimentation. The Roaring 420s offer a particularly fun loving and upbeat style of rock 'n roll that's not without its peculiarities and love for off kilter sounds. They channel the best of the genres, blending psych, garage and surf - among others. And then there are the wonderful electric sitar flourishes.

At heart, curators of laid back grooves, The Roaring 420s possess a prowess for making the moments of experimentation fit well. "Whatever Palace" puts its best red herring forward, almost clearing the aural stage mid album before returning to form and the coolly put intro and second act of "Anything You Want (to Be)." With clever turns of phrase (think of Lou Reed, David Berman, both of whom share timbre here too), The Roaring 420s can transform a familiar riff into something much more. Their sense of humor translates well too, particularly with the amalgam of post-punk and early rock tones in "Tax-Deductible Suicide."

"You Can't Get Out Alive" is a continuation of what the band began in 2013 with their self-titled release and sustained through 2014's full album, "What is Psych?" Still, this latest marks a change a bit too, particularly in the band's overall sound, which here is more compact, precise, and demonstrates a greater concern for their brand, in a way. From here on, I suspect The Roaring 420s will only become better at what they do, polishing their songwriting into strong, witty gems.

You can order this one from It's a Gas Records directly - and possibly get it signed on the way.