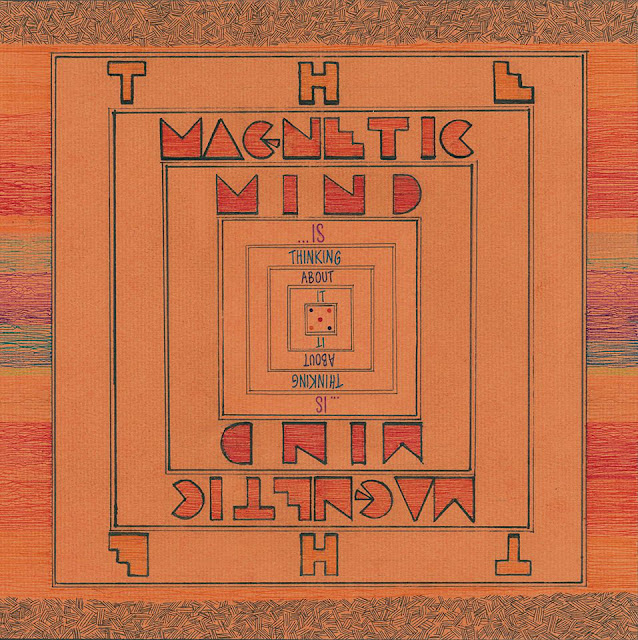 I've been following the progress of these London revivalists since the earliest days of the Active Listener. Indeed I count their two 7" singles (which you can read about here and here) as two of my favourite discoveries of the last five years. This being the case, I was obviously brimming with anticipation for new material, and with only four tracks to satiate me over the previous four years or so, a full length album of twelve tracks is an almost unbelievable treat to behold.

Anticipation ramped up to such levels can often build unreasonable expectations of course, but I'm extremely happy to report that "The Magnetic Mind is Thinking About It" is exactly what I'd hoped for, but dared not expect. While those familiar with the singles will agree that there are no massive surprises here - no lengthy, explorative workouts for example - what we do have are twelve really tight pieces of garage psych, all single-length and single-worthy, with more than the required compliment of hooks to ensure that they'll be swimming around your psyche for weeks after only a single listen.

There have been a few changes in personnel over the years, but the current line-up has coalesced into a rock solid five piece that allows each of the players to draw attention to, and play off of, each other's strengths - not the normal course of events for those that choose to operate within the restrictive confines of a typical three minute song structure.

Vocalists Ellie Foden and Paul Milne's voices combine in a way that draws inevitable (but lazy) Jefferson Airplane comparisons, but the Magnetic Mind are a much more garage-centric affair than their San Francisco forefathers, with organist Sarah Gonputh a dominant presence, supporting the rhythm section while providing plenty of memorable hooks of her own. This leaves plenty of space for Aaron Brooke's fuzz guitar leads to thrash around like a cornered animal, rather than provide a rhythmic counterpoint.

There's no point singling out individual tracks for particular attention on a release such as this. Everything here is lean and filler-free, resulting in a consistently engaging album. It's like a greatest hits collection that's been beamed in from some legendary sixties chart toppers from an alternate universe.

Enough hyperbole from me though, check out the stream below, where you can also buy the digital and vinyl versions, but be aware that the vinyl version has a MUCH fuller sound than what you'll hear on the relatively weedy stream - but I'm sure the stream will be enough to grab your attention to start with. Thank God they finally stopped thinking about it, and got it done!