Keith Seatman - A Rest Before the Walk 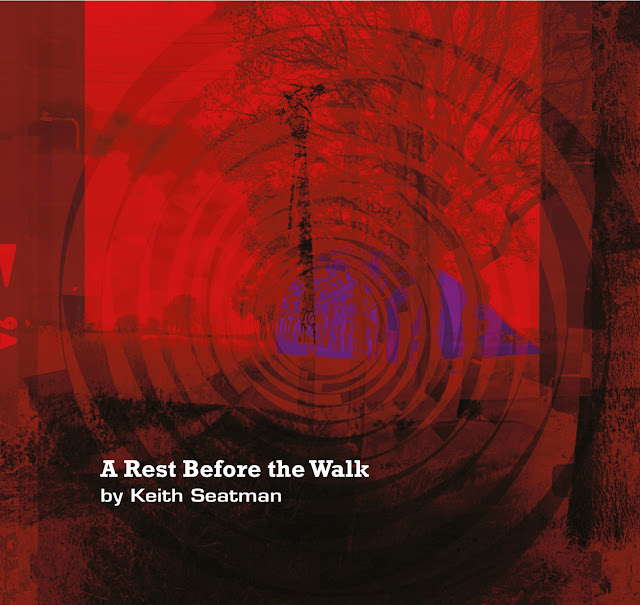 Hampshire’s Keith Seatman is a name that will be familiar to many from his previous albums such as ‘Around The Folly And Down Hill’ and ‘Consistently Mediocre And Daydreams’, both modern classics of spooked electronica and shadowy synthesised vignettes. If you have not already do take a journey through his back catalogue, there are many evocative and unsettling treasures to be found. Seatman is also known for his superb ‘Test Transmission Archive Reels', extensive mixes featuring vintage recordings, electronic and hauntological tracks and choice musical offerings. His new album ‘A Rest Before the Walk’ continues his unbroken run of highly impressive solo releases and also ups the ante, adding extra layers of eerie and disquieting sound as well as a whole raft of instantly memorable harmonies.

Album opener 'We All Had Our Dreams' begins proceedings in a suitably haunted fashion, the crackle of an old phonograph leading to a backwards vintage recording that fades into the ether before 'Strange Tales And Lost Paper Trails' enters and takes us into another realm entirely. Frantic and tense piano underpins a gorgeous spectral melody with the sound of echoing bells and a bowed saw/ theremin which drifts across the track like mist down a moonlit street. It's a hugely effective opening to the album and immediately lets the listener know that this is something special, something out of the ordinary and something inspired. 'There's Something Outside' mixes BBC Radiophonic Workshop style effects with ominous whispering and an electronic harmony that glides across the speakers in an icy but utterly addictive sweep whilst following track 'Once More with the Whirligig' blends Twin Peaks-esque xylophone and chimes, harpsichord and increasingly off kilter hums and whirrs to create a curious electronic folk dance. A sampled archive recording of an old folk rhyme adds just the right amount of unearthliness and a genuine sense of times past floating ghost like into the present.

'Broken Folk' is a perfect slice of electronica, Douglas E. Powell’s layered and plaintive vocals merging with vintage keyboard washes in a truly heart-breaking and haunting manner as glitched and stuttering drum breaks provide an effective aural framework. 'Made by Sun and Ice' slips into view with synthesised percussion and sinister bass notes, not unlike something John Carpenter might conceive of, particularly if he should happen to bump into John Foxx in the studio. Other reference points are Coil's 'Horse Rotovator' and 'Musick To Play In The Dark' series; indeed fans of Coil and other electronic acts with a penchant for the darker slipstreams such as Broadcast, Belbury Poly (whose Jim Jupp provides additional production on the album), Concretism, The Unseen and Klaus Morlock will find much to adore here. 'Race You To The Top' is a glistening, prog/ electronica gem; washes of glacial synths appear into view, sliding over dramatic drum rolls and building ever more towards a dystopian but beautiful finale. This could easily have been the soundtrack to 'Stalker', ‘Artemis 81’ or a similar film or TV show portraying a bleak and alien landscape, something that is both of this world and also not. For this is not electronic music that speaks of a utopian future or any kind of shiny science fiction notions of the coming world; this instead speaks of the recent past and of the Edgelands; the all too real dark urban corners where town meets the rural countryside and where time seems to rift and split apart, evoking shadows and archetypes.

'Thinking, Doing And Moving's abrasive keyboard motifs are perfectly matched by the symphonic and icy beauty of the central melody to create something that manages to be both lovely and disturbing. 'My Morning Ritual' introduces vocals again to superb effect, the song becomes a doomed electronic torch song with significant emotional power. Next, instrumental 'I Wish I Wish I Wish' sees drums echo over swirling, synthesised choral banks of keyboards; the impact is truly shiver inducing, almost melancholically anthemic and reminds this listener of Foxx-era Ultravox, Architecture And Morality period OMD and some of The Advisory Service's recent work. 'Waiting for Mr Fieldpole' is an unnerving traverse through darkly rendered keyboard basslines and melodies, suggesting something unsaid and awful about the song’s protagonist and what will happen when he arrives. An album standout (and the standard is extremely high) this track seems to encapsulate the entirety of what Seatman has conjured up. Indeed, the album has an air of quiet dread, a very English sense of coming terror and a feel of something wicked this way comes to a small, unprepared, sleepy village.

'Sun in Her Hand' is more urgent, analogue keyboard lines racing underneath reverberated effects, scrapes and whistles; this listener found himself unconsciously holding his breath whilst listening, waiting tensely for the outcome. 'Along The Corridor, 1st On the Left Room 2882' adds an edgy Tangerine Dream ambience to the sound of electronic solar winds and a doomed but inspirational melody line that surely should be soundtracking the forthcoming Ben Wheatley adaptation of J.G Ballard’s' High Rise'. The track pauses as electronic percussion pulsates and then the massed banks of keyboards return before fading to the sound of a ringing telephone and sudden crashing noise; the overall effect is jaw dropping and hugely affecting. The title track then ends the album with a sinister waltz, the march of the autumn people slowly but surely creeping into the quiet, unsuspecting streets. Harpsichord picks out a whimsical but terrifying melody, overhead voices chatter and an eerie drone increases in volume as the walk continues (forever?). A man’s voice utters 'We are going in circles' and the pleasingly disorientating and unearthly harmonies echo and reverberate around us before the album closes.

‘A Rest Before the Walk’ is an essential listen, its tracks not only standouts on their own merits but also expertly interwoven into a coherent, effective overarching mood as a whole. Seatman has produced perhaps his best album to date and, given his earlier work is also indispensable and a must have, this is significant. Some might call this music hauntology, others electronica; what it is is a damn fine album that you need to hear.

Available now from Keith Seatman’s Bandcamp page (below) and also from the Ghost Box shop.