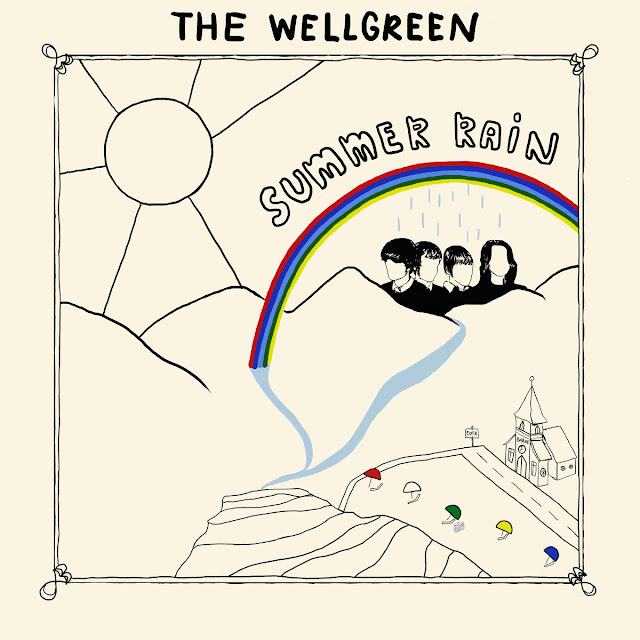 Glaswegian band The Wellgreen have been hovering around the fringes of my awareness for quite some, but it wasn't until Spanish label Pretty Olivia Records released this vinyl collection that I actually got around to listening.

"Summer Rain" isn't an album as such, but a collection of the best material from their two self released albums, accompanied by some new and previously unreleased material. This proves to be a sensible decision, given the opportunity for a vinyl release with an already impressive digital back catalogue, and it ensures that you, the listener, have the very best Wellgreen album possible, rather than the band being sticklers who are unwilling to fiddle around with an established back catalogue. And the result is the best introduction one could possibly hope for.

This is classic, vintage pop at its best, steeped in the homespun, piano-centric tradition of Emitt Rhodes and early Todd Rundgren. And OK let's be honest: the early solo works of Paul McCartney and Wings too. For anyone who wished that Macca had coaxed one more "McCartney", "Ram", or "Wild Life" out before embracing the slicker sounds that the seventies studio had to offer, this one goes out to you. Let's be clear though, while "Summer Rain"s influences are worn openly on sleeve, they're far from derivative - let's call it affectionate homage shall we?

There's a casual and easygoing charm to these recordings, which are obviously the work of a bunch of friends doing what they love, and it's very easy to be swept up in that enthusiasm, especially when the songs are as strong as those you'll find here. The title track alone is worth the admission price, offering plenty of surprises and clever, unexpected embellishments, while adhering to the sort of record-collector / classic rock principles which will make lovers of the vintage swoon with delight. And then there's the infectious, tossed off charm of "Grin and Bear It", which, after several listens, had embedded itself so deeply that I felt like I've always known it.

And there's ten more where those came from, all delivered with a knowing wink, and an inescapable good humour. Fans of the artists mentioned, as well as more contemporary outfits like Dr Cosmo's Tape Lab and the Junipers owe it to themselves to check this out immediately.