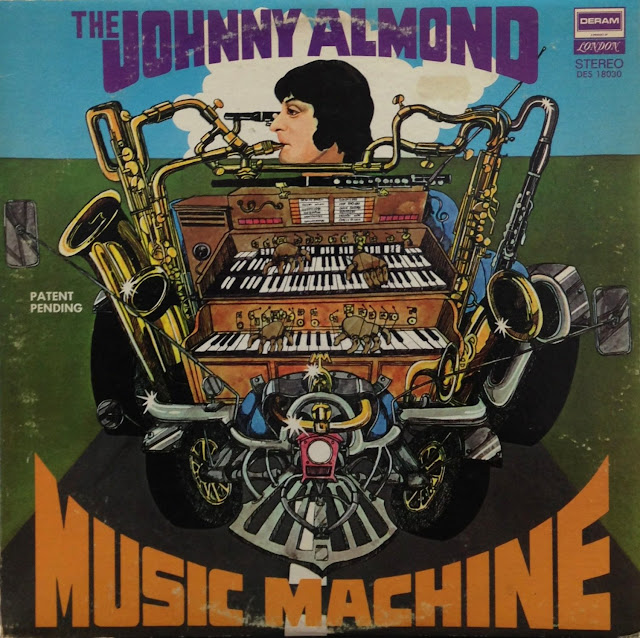 Originally released on Deram in 1969, this first release by Johnny Almond's Music Machine is now startlingly rare in its original form, and surprisingly, this new Esoteric reissue seems to be only its second reissue since 1969.

This is surprising given Almond's pedigree. By 1969 Almond had already been a member of Zoot Money's Big Roll Band (he only left when Zoot folded the band in order to join Eric Burdon's recently psychedelicised Animals), the Alan Price Set, and John Mayall's Bluesbreakers. And after the two Music Machine albums, he formed Mark Almond with Jon Mark (whom he'd played with in the Bluesbreakers). All bands with a certain amount of collector's cache, so this must be absolute garbage to have been left untouched until now, right? Guess again.

"The Johnny Almond Music Machine" is an excellent, diverse album that epitomises the adventurous spirit of the 1969 underground, featuring a crack young band, with a teenaged (future Yes) Alan White tearing it up on drums. Almond himself plays a ridiculous numbre of different instruments on here - Sax (Tenor, Alto & Baritone), Flute, Alto Flute, Organ, Vibraphone, Mellotron and Bass Clarinet.

Almond's R&B, jazz, and blues roots aren't forgotten, but the funk levels are amped up considerably on the numbers that vamp on this theme. Check out "Solar Level" and Junior Parker tribute "Tales of Junior", which are particularly beaty and brassy.

In keeping with the spirit of the times though (not to mention the label), there's a strong progressive and post-psychedelic element to a number of these tracks too, and these are the tracks that are most likely to capture the imagination of readers of this rag. "Voodoo Forest" will be familiar to many readers from its appearance on Decca's bargain-bin staple "World of Progressive Rock" compilation, and its moody atmospherics are indeed one of the highlights here for those of an adventurous mindset, but it's not alone. "Reversed for Two Horns" is a startling, explorative duet between Almond and trumpeter Geoff Condon, who was apparently flu-ridden during this session. If so it certainly explains the feverish, hallucinatory levels this track often reaches. And opener, "Ensign" is a beaty jazz funker which would have been ideal for soundtracking a UK crime film of the time, were it not for it's face-melting psychedelic conclusion.