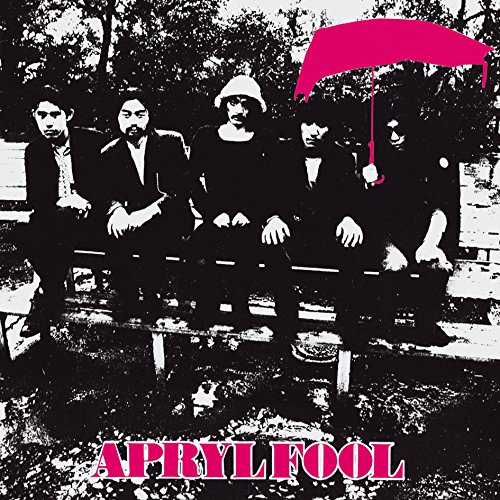 Yet another amazing band from the classic psychedelic era that I'd completely missed. The Apryl Fool have got a great sound, mixing blues with acid guitar, classic piano and organ. Prominent bass lines lead their sound, while the crunchy lead guitar fills in the gaps. With Haroumi Hosono on bass, Takashi Matsumoto on drums, keyboardist Hiro Yanagida, lead guitarist Eiji Kikuchi, and the soothing lead vocals of Chu Kosaka, this Japanese band's self-titled album from 1969, is a mind blower.

A unique organ runs through “Tomorrow’s Child”, giving it an “out there” feeling. Warm bass lines touch your heart and soul. Blazing guitar riffs tear through you, leaving you wanting more. I was actually brought to tears of joy listening to this song. Music is so incredible that way.

“Another Time” reminds me of the Paul Butterfield Blues Band. Chu Kosaka’s vocals are just amazing. He really has a great voice for the blues. Never leaving the space they created, it slows you down and calms you. You’ll never realize you’ve been listening for seven minutes, becoming lost in the music.

“April Blues” is straight up blues with fuzzy lead guitar. The vocals, remind me of Pink Floyd. Very creative with the use of sound clips, it sounds like a band practicing in a recording room with friends chatting it up while the band plays.

“The Lost Mother Land (Part 1)” leads in with a heavy psychedelic vibe. With unintelligible, synthesized vocals, it’s a beautiful, chaotic, psychedelic mess. It reminds me slightly of something The Doors would have done.

“Tanger” is a complete treat. With Jethro Tull vocals and feel, I couldn’t help but pull out my own guitar and play along. The more I hear of this album, the more I want.

“Sunday” slows things down and Kosaka sings in his native language. This song is quite a wonderful, floaty, treat. Crunchy guitar riffs are left behind for the classic humbucker sound of a Les Paul, switching blues for a more jazzy sound.

“Honky Tonk Jam” lives up to its name. Straight up, good-lovin’, honky tonk!

“The Lost Motherland (Part-2)”….trying to write as I listen….but my mind floats into space and beyond.
What a trip! I can’t express how much I love this song! I wish it was never ending; but hey, that’s what repeat is for!

It has been a real privilege reviewing this album. It's been too long since I've listened to an album like this for the first time. It takes you on an incredible journey of the mind and spirit. The energy of this band is unexplainable. You..must..listen. I can’t wait to delve deeper into Haruomi Hosono’s work.