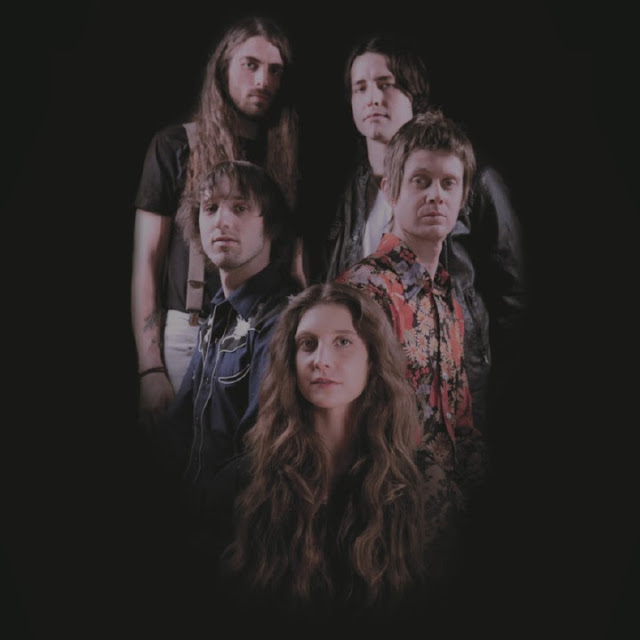 Ohio's Electric Citizen mention "witchy seventies metal" on their bandcamp page, which only begins to describe their sound which has a sort of Pentangle-laced Pentagram vibe to it, but unlike the majority of vintage heavy rock revivalists cropping up (mostly over in Europe admittedly) who seem to wish they were on the early Vertigo roster (Witchcraft, Graveyard, Vidunder etc.) this lot have a pronounced West Coast psychedelic influence that gives it the sort of period flavor that crate digging readers will eat up.
Debut, double 7" "Electric Citizen"  pressed in a tiny edition of 300 is a complete marvel.
"Shallow Water" is a downbeat opener, heavy on the evil sounding Pentagram riffs, and the first appearance of Laura Dolan's vocals makes quite an impression which doesn't let up for the remainder of the E.P - it's as if Stevie Nick's had followed her witchy seventies compulsions to their natural conclusion. There's also what sounds like some wonderfully unexpected mellotron flute blanketing the chorus in a very pleasing vintage fashion.
"Shallow Water" and "Magnetic Man" up the tempo and add some Sir Lord Baltimore to the Sabbs / Pentagram equation nicely.
Most impressively though, closer "Hawk Nightingale" crops up just at the right time to confirm that Electric Citizen are aware that heavy atmosphere can be conjured without relying on crashing drums and heavy guitar riffs. An epic piece of psychedelia with hazy organs, jangly eastern-tinged guitars and Dolan's piercing banshee wail creating an intense atmosphere of dread that reaches proportions unparalleled since Jim told us about his unfortunate parental issues in "The End".
A perfect primer for an act that are gonna be huge. Only 300 copies of the 7"? Criminal. Make sure you get one!