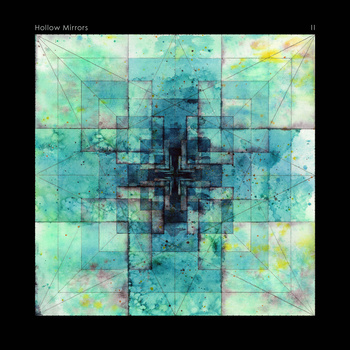 I get e-mailed a bunch of albums for review that have arty, ambiguous sleeves that offer little or no indication of their contents. Nine times out of ten these tend to be hipster synth-pop which the artists for some reason like to think of as psychedelic, even though the old polyester pant suits that used to hang in my Grandmother's closet were more lysergic.
It's the one out of the ten that prove to be far more interesting and this second album by San Francisco's Hollow Mirrors fits firmly into that category.
It's a staggeringly diverse album with an awareness of many genres, but a distinct sound of it's own at the same time.
"The Falling of the Hour" illustrates this diversity admirably, combining a big Sabbathy guitar riff (not to mention the underwater tremeloed vocal parts - "Planet Caravan" style, with moody seventies keyboards stabs and wide open, spacious "Live at Pompeii" textures.
Lest I have you thinking this is all prog pomp and bombast, let me direct you to "In the Garden" which largely drops the grandiose instrumentation in favour of rich, harmony laden folk, which sounds a whole lot like the Fleet Foxes taking on the druidic, neo-pagan folk rock of Midlake's "The Courage of Others"
And if that's not enough variety for you, the second half of "City Lights" gets into some intricate "Marquee Moon" style dual guitar noodling that may not threaten "Marquee Moon"s supremacy, but gives the better material on "Adventure" a serious run for it's money.
Certainly an expansive sound from a group who manage to acknowledge their influences without silencing their own voices. If you enjoy the more recent psychedelic prog stylings of the likes of Astra, or the cross-genre experimentation of the early seventies underground, you may have just found your new favorite band. Highly recommended.