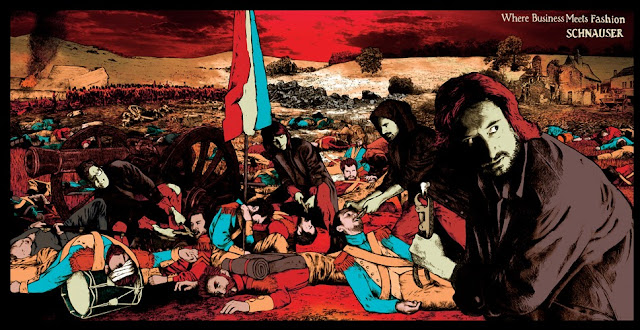 I've been playing this album a bunch since it was sent through to me a few months back for inclusion on that month's sampler. The actual release date isn't until the end of September, but I can only hold my enthusiasm in for so long, and I reckon I've done a pretty good job over the last few months, but I'm about to burst so here goes.
Schnauser are one of those bands that you expect would have a massive following, but bafflingly don't (for now anyway, but I suspect the future holds something good instore for them).
"Where Business Meets Fashion" has a cover that perfectly sums up the ethos of their music, equal parts humorous quirkiness and sprawling ornate beauty.
Incredibly tuneful psychedelic pop, with unusually proggy time signatures, this is music that is equally cerebral and approachable - imagine Caravan fronted by Jarvis Cocker and you've got a bit of an idea of how often the quirkometer is tweaked here.
They also show an aptitude for the straightforward too - the jangling guitars and heavenly harmonies of "Dinner Party" compress pretty much everything I love about sixties pop into one near-perfect pice of ear candy.
Those harmonies are used to maximum effect throughout, sugarcoating the album in a slightly addictive fashion that makes revisiting the album often something that this particular listener has had little control over.
Keyboardist Duncan Gammon's sparing use of mellotron is a revelation too. Now synonomous with earnest upper crust English prog (Moody Blues, I'm looking at you), it's refreshing to be reminded that most of us were introduced to the instrument via much more fun, psychedelic pop channels.
And that in a nutshell is the appeal of "Where Business Meets Fashion" - Schnauser have an uncanny ability to channel the difficult, the overtly cerebral and the proggy into irresistible and timeless pop music.
So, yes a little mean of me to have you salivating over something that you can't actually hear yet, but follow them here on facebook . You won't be sorry.

Update! bandcamp pre-order link with a couple of streaming previews now up!