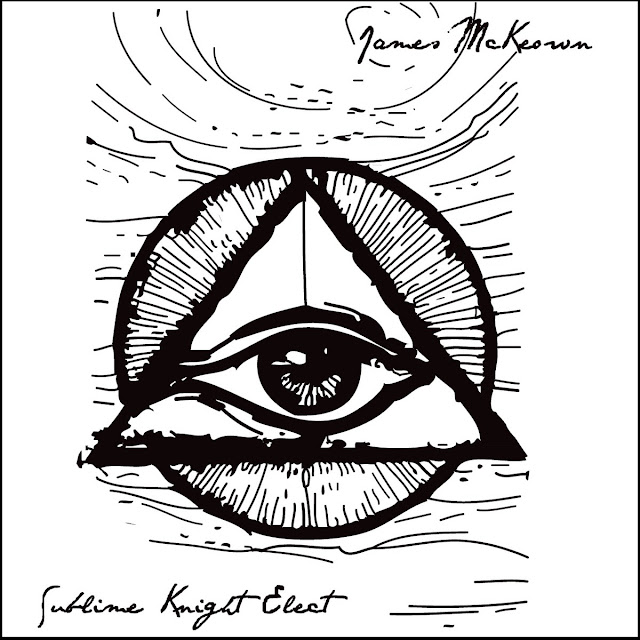 Longtime readers will know that I have a bit of a thing for the music of Mr McKeown (his previous album "English Dream" occupied the number two position on my 2012 albums of the year list here).
His "fingers in many pies" approach means that you're never quite sure what you're going to get from his projects. Since "English Dream" he's also done some effective remixing for Sproatly Smith, covered the Hollies with his band Hi Fiction Science and produced a selection of krauty instrumental songs with Hi Fiction Science offshoot Dead Pylons which appeared on one of Fruits de Mers recent Strange Fish collections. The Strange Fish compilations also featured four show-stealing instrumental tracks credited solely to McKeown, and the newly released nine track album "Sublime Knight Elect" features the full batch of songs from which those four were selected.
Taking astronomy, Masonic ritual, alchemy and neolithic ceremonial sites as inspiration, these moody instrumental numbers cast a subtle, but gripping spell with a cumulative appeal that makes repeated plays almost a compulsion.
Cast using a palette of acoustic and electric guitars, bass, ebow, and various keyboards, synths and tape manipulators, these are evocative mood pieces that in lesser hands could quite easily fall into the trap of being cast as 'background' music (surely musicians must HATE this?) Fortunately McKeown is wise enough to grace each tune with sparse, skeletal melodies, which are simple and often naggingly familiar.
It's best experienced as a whole, but special mention must be made of the shadowy melody of "Silbury" which positively smacks of ancient mystery and ceremony, as well as "Ursa Major" which multitracks McKeown's voice into a wordless chorus, before soaring into ebowed guitar heaven.
Ambient hauntology embued with the sort of quintessential Englishless that this sort of stuff thrives on, this is unceasingly clever and manages the nifty trick of using thoroughly modern means to conjure an ancient and almost timeless druidic vibe.
Marvelous.