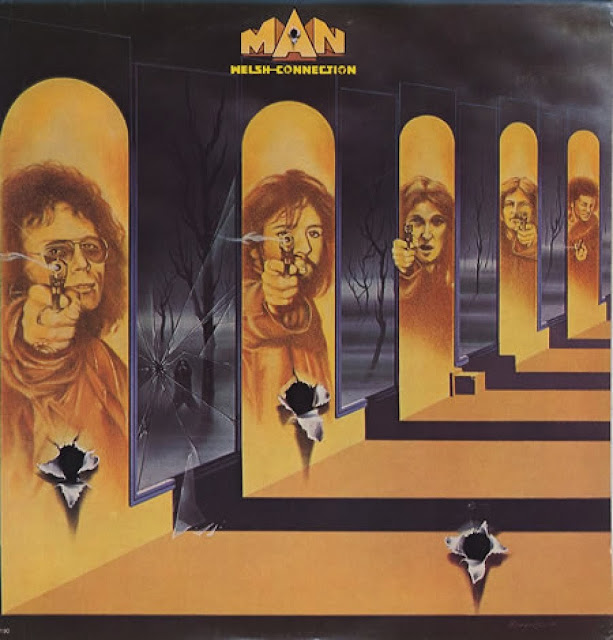 Good on Esoteric Records for giving us a chance to re-evaluate Man's much derided original studio swansong.
Originally released in 1976, "Welsh Connection" has caused crinkled noses among Man fans (myself among them) for many years now, with the original vinyl release having a thin, reedy sound that was impossible to warm to, and the only previous CD release sounding like it was mastered from the worst copy of that vinyl that the manufacturers could lay their hands on.
Esoteric have a rep for providing some of the best remasters in the reissue market (their Ginhouse reissue a few months back puts my original vinyl copy to shame), and "Welsh Connection" may be their best salvage work yet. Phil Ryan's keyboards are still high in the mix, but Ben Wiseman's sensitive mastering unveils all sorts of nuances in Deke Leonard's guitar playing that were buried in the original mix.
But what of the material itself?
It's a tough one, and I can see where big Man fans struggle with this one, because as a Man album it essentially fails. The progressive and psychedelic rock elements of previous albums are largely absent.
This however doesn't mean it's a bad album by any stretch of the imagination.
"Welsh Connection" is a very polished affair, in terms of both production (with this new mix anyway), and performance. Those looking for something with a little grit should certainly delve back further in their catalogue, but those with a more open mind will discover an album with peaks that at times reach the heights of prime era Steely Dan, and occasionally suggest an Alan Parsons Project raised on the Grateful Dead rather than Pink Floyd.
And if you're still not convinced there's still the little matter of the bonus tracks to consider - Man's full concert performance at The Keystone, Berkeley, California from 9th August 1976, a chance to relive some of "Welsh Connection"s tracks in the grittier, less polished form that many expected when the album was originally released.
So, not a triumph, but certainly not the dog some would have us believe it is either. Well worth a revisit.