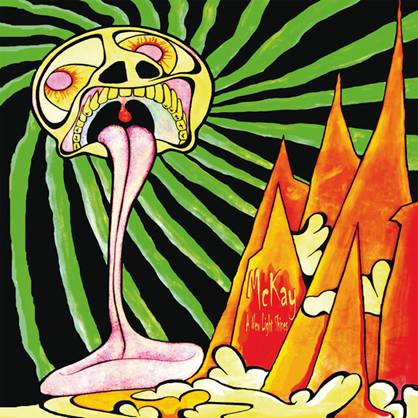 Ray "McKay" Pierle may not be a household name, but his private press 1977 LP "Into You" has developed quite a reputation and found many admirers over the years.
"Into You" is a pretty hard record to classify. It's closest to cosmic american in spirit, but there's no way anyone's going to mistake it as a lost piece of Gram Parsons' legacy - more of a slightly psychedelically inclined Neil Young with a tendency towards southern rock and outlaw country perhaps? Anyway, the point is, if you've only heard "Into You", you've only heard part of the picture. Guerssen have unearthed a stack of McKay master tapes recorded between 1974 and 1979, and unleashed them upon us in the form of "A New Light Shines", due out in early September on vinyl only.
"A New Light Shines" goes a long way towards justifying McKay's reputation as a psychedelic artist (which was only really hinted at on "Into You"). OK, so it's not as face-meltingly psychedelic as the cover art may suggest, but it certainly leaves "Into You" for dead in terms of attention to psychedelic detail, and in this writer's opinion, in the songwriting department too. "Into You" has a solid reputation for sure, but if I were to be played both albums, and told that one was a released LP, and the other a bunch of outtakes, I'd be needing a second guess to work out which was which.
Opener "Blue Mountain" is immediately more engagingly lysergic than anything of McKay's I've heard before, with slowly sweeping Beatlesque guitar arpeggios run through an evil sounding Black Sabbath filter, covered in layers of wailing acid guitar. Where did this come from!
"The Ocean" on the otherhand is a delicate, acid-folk acoustic instrumental swathed in reverb, and peppered with vintage UK acid-psych flutework. Until it turns into a big seventies hard rock number.
And it continues in this vein, mixing McKay's more well known rural rock tendencies with all sorts of seventies rock / psych / prog stylings, and even when the songwriting occasionally shows signs of weakness ("This Is a Love Song" being the only real offender in this department), the attention to production detail and instrumental dexterity can be relied upon to step in and save it.
I can see why this wasn't released at the time - who was going to buy a psychedelic rock album like this during the first punk age? - but "A New Light Shines" needs to be heard, and it's better late than never.
So, a bit of a revelation here, and an essential purchase or at least listen, for any and all fans of seventies psychedelia.